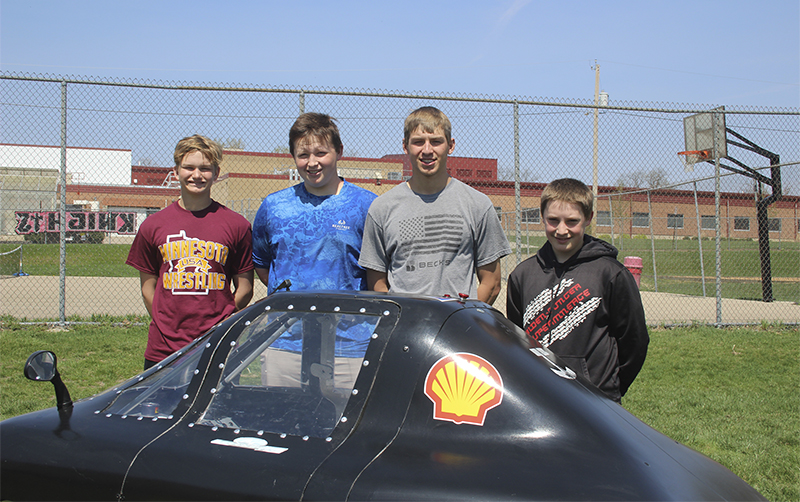 The supermileage team competed with four cars against other high school teams in the state’s MTEEA Supermileage Challenge Sunday through Tuesday at Brainerd International Raceway.

“We had some struggles with the one car, but the other three cars are our pro sport, the urban concept and our electric car all received first place finishes at that event,” said Amy Wallin, student counselor and adviser for the team.

During the competition, high school and college teams build cars intended to have the best fuel mileage possible.

“It’s a high-mileage competition,” she said.

Pro sport was a new category this year in Brainerd.

“There’s multiple classes,” she said. “You can come, you can bring more than one car in the same class if you really wanted to.”

Before competing, the team had to pass technical inspections, which — according to Wallin — can sometimes be a challenge. The team also had to complete six runs to qualify for placing.

Prior to that competition, the team competed in a Shell Eco-Marathon Americas, held in Indianapolis from April 10 to 13 in what was considered a mini-event as Shell hasn’t held a competition since 2019. That was also the last time the team traveled to London. It was the first live event since July 2019.

“It was teams from Canada and the United States, some colleges and universities as well as some high schools competed in that event,” she said.

There were two categories at the event: prototype (a small, single-person vehicle) and the urban concept category (larger, street-legal vehicles with one person). The team placed second with its diesel, urban concept car in the internal combustion engine class.

“You have to get through the technical inspection,” she said. “There’s a lot of different things that have to be covered in that, and the car has to meet those criteria in order to pass inspection before it can get on the track.”

Each team that passed inspection was given five runs, with the best being counted.

“In the urban concept class there were only 11 cars that got through technical inspection out of 18,” she said. “… Five out of the 18 total made valid runs.”

“A lot of young students this year,” Wallin said.

Brody Ignaszewski is a freshman and was on the supermileage team, though he started as a seventh grader.

“I’ve always seen [the team] do it when I was little before I was able to join,” he said. “And then I said it looks fun. I’ve always kind of been into that type of stuff, so then I was like ‘give it a shot’ and it’s been really fun.”

His role has been building the supermileage cars.

Caleb Sorensen is a senior and has been with the team since seventh grade. This year he served as the driver, but he also served as a mentor to younger students.

Sorensen plans to head out to a technical school in South Dakota for welding, and said the experience on the team helped prepare him for his next steps.

“I’ve always — welding intrigued me and because of supermileage that’s what made me go into welding.”

He also said the troubleshooting he has done helped prepare him for his next steps.

Prior to arriving at Alden-Conger, Wallin admitted to having never heard of a supermileage competition.

She said she is looking for parents of students to reach out if they are interested in becoming an adviser. Contact the school at 507-874-3240 and ask to speak with Wallin.