Burn survivor shares value of serving, listening to each other, how he moves forward after war injury 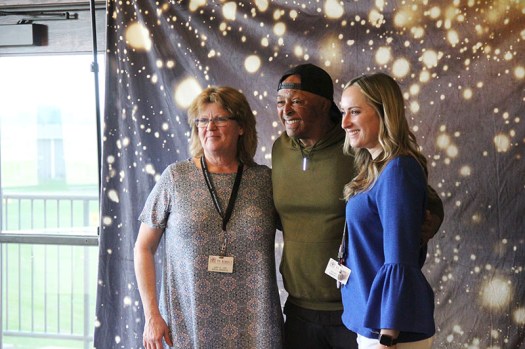 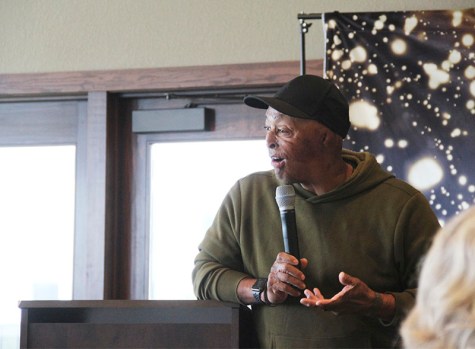 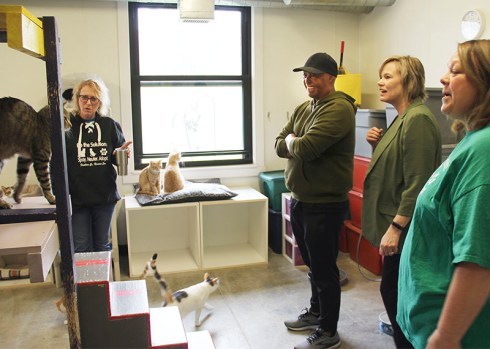 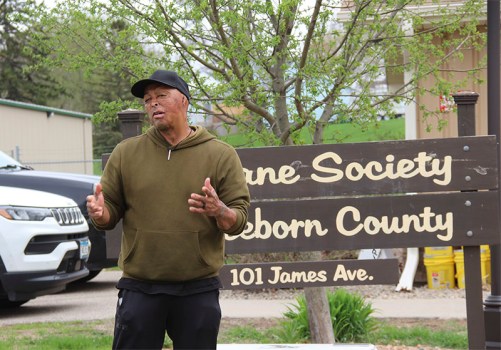 Martinez makes a promotional video for the Freeborn County Humane Society Tuesday afternoon after a tour of the shelter. He was also slated to speak to youth Tuesday evening. A full schedule is also planned for Wednesday. Sarah Stultz/Albert Lea Tribune

Burn survivor J.R. Martinez describes the day of his life-altering injury as a rebirth.

Serving in Iraq in the Army at the age of 19, Martinez was in a Humvee that hit a roadside bomb on April 5, 2003, only a few weeks after he had been deployed.

While the other soldiers who were in the vehicle with him were ejected and received only minor physical injuries, he was trapped inside for a time, receiving burns on about 35% of his body.

He endured a coma, numerous surgeries and years of rehabilitation but

has since gone on to rise above his injuries and is now a motivational speaker, a New York Times best-selling author, husband and father. He also acted for a time on “All My Children” and was on “Dancing with the Stars.”

In addition to his physical injuries, however, he also talked about the mental health challenges he and others close to him have faced and the importance of simply listening to others.

“There’s still so many more people that need us,” he said to a room full of health care, mental health professionals and others at Wedgewood Cove during remarks that centered around mental health.

The event was part of a series of events Martinez is a part of in Albert Lea this week in coordination with the Albert Lea-Freeborn County Chamber of Commerce. Chamber Executive Director Shari Jenson met and became friends with Martinez when she previously worked through the United Service Organizations in Texas where he was in recovery.

Other events planned included one for youth that centered around acceptance, inclusivity, self-care and resiliency on Tuesday evening. A Veterans Appreciation Breakfast was planned for Wednesday morning, followed by a Leadership Luncheon from noon to 2 p.m.; and a Fun & Games with Martinez from 5 to 8 p.m. All proceeds of the events go to support the chamber.

Martinez also made a stop to the Freeborn County Humane Society Tuesday afternoon for a tour and to promote help for the shelter, and was expected to promote dredging on Fountain Lake with the Shell Rock River Watershed District Wednesday.

Martinez said resiliency was not something he just decided to build and have one day after his injury. He said he was born in Louisiana, his father left when he was 9 months old and he was raised by his mother. From the ages of 5 to 8, he witnessed his mother in an abusive relationship, what he called his reality for a long time.

Even as his mother was in the midst of the abusive relationship, he said she smiled a lot “to invite the blessings and be able to receive them.”

He also recalled how she would always be willing to sit him down and hear his thoughts.

At the age of 9, they relocated to Arkansas, where he said he got picked on a lot. At the age of 16 he one day remembered thinking of getting into a car accident and wondered how many people would show up at the hospital.

He said he realized in his 20s the pressure he had felt  that he had to take care of his mother. He constantly felt like he had to fix things, and that carried over into his adult life.

He said his mother experienced a lot of trauma and never dealt with it, causing problems especially later.

Toward the end of high school, they moved to Georgia, where he ultimately graduated in 2002 and where he calls home now.

After high school, he decided to go into the Army, which his mother was initially against, having already  lost another child. But she sat down and listened to why he felt it was the best thing for him to do.

Martinez asked the crowd how many empower others the way his mother did.

He went into the Army not thinking he would be deployed, but two months later was on a plane going to war. Only three weeks into the deployment he was injured.

He said though the others who were with him in the vehicle that day only had minor physical injuries, they have many other emotional struggles.

He asked how often people had seen someone who was always smiling and seemed OK, but later found out they had been badly struggling.

Martinez said one of the most incredible gifts people can give to another person is to listen to their pain. You don’t have to understand it.

Six months after his injury, his medical team became his family. He said he became overwhelmed with long-term thoughts about what would happen to him after he was out of the hospital. Then he started to focus on the short-term, making it one day at a time.

A nurse asked him to speak to another burn patient one day, and though he at first wanted to walk out of the room, he stayed and felt he had made a difference.

Afterward, he contacted the burn unit to see if he could visit all the patients and he started doing this for a couple months.

“As much as I may be giving them something, they gave me something I was missing,” he said, referencing his ability to serve again.

He said at that point he decided he was going to be in control of what happened to him and now refers to the day of his injury as a rebirth.

He told those in attendance to not underestimate the difference they could make in the lives of those around them — even strangers.

“Everything that I do — it all comes from this place of service,” Martinez said. “That’s the foundation I sit on now.”

He also briefly answered questions from the audience, some about his time since his injury, others about his time on “Dancing with the Stars,” and some yet on challenges he still faces.