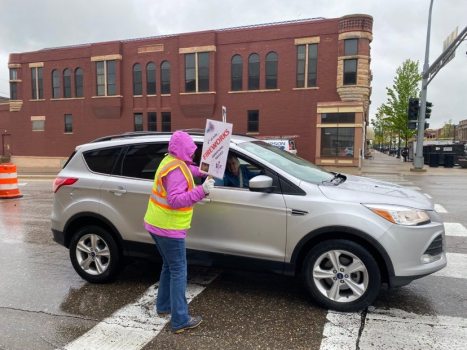 Mary Thompson collects a donation for the fireworks from a motorist passing by Thursday morning. Sarah Stultz/Albert Lea Tribune 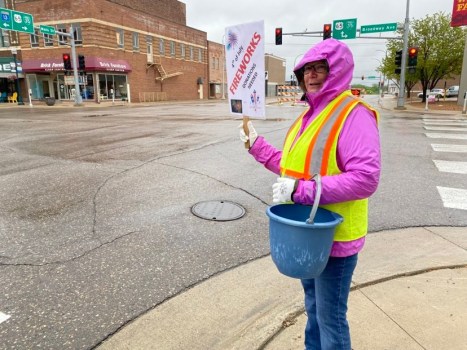 Albert Lea-Freeborn County Chamber of Commerce Ambassadors, volunteers and representatives with KATE Radio took on rainy weather Thursday morning as they kicked off fundraising for this year’s Fourth of July fireworks display.

The goal this year was to raise $20,000, said Chamber Executive Director Shari Jenson. If anything above that amount was raised, it would go into a reserve account dedicated to fireworks in future years.

The volunteers were set up asking for donations at the same intersection as in years past — at Main Street and Broadway — though the construction further east on Main Street had the road closed east of the intersection.

Jenson said they decided to keep the fundraiser at the same location to avoid confusion in the community. Steady traffic continued to flow through close to 11 a.m.

Jenson said Albert Lea Select Foods kicked off the day with what she described as a “substantial” donation and she was thankful for all who donated.

New Chamber Ambassador Mary Thompson of Freeborn-Mower Electric Cooperative said it was her first time to be a part of the fireworks fundraiser. Though it was cool and rainy, she was prepared in a raincoat.

“Our fireworks are fabulous,” Thompson said. “It’s always a wonderful evening, and our entire family enjoys it.”

Jenson said anyone who is not able to make it to donate Thursday can drop off their donation at the chamber office, 132 N. Broadway.

Volunteers were expected to be out through 4 p.m.

Check back for an update on the amount raised.