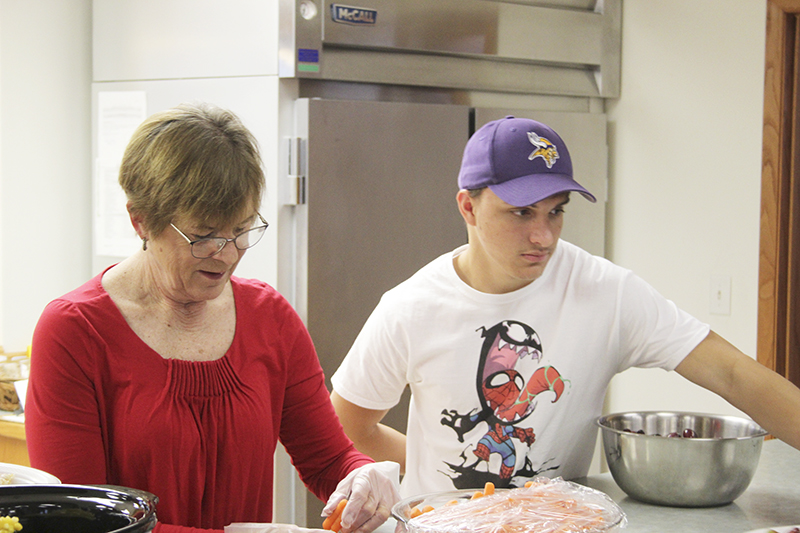 Joel Guttormson, pastor at Salem Lutheran Church in Lake Mills since 2016, recently took on a new role with children in the community: overseeing the summer feeding program, a state-funded program that provides free meals to children 1 to 18, which has been in existence since 2013.

Guttormson said funding for the program was based on the number of children in the community.

“It’s a percentage wise of children that are in need of the community,” said Deb Canny, a volunteer with the program who also works on the food service staff at the school. “And we — we’re under that.”

Guttormson said the program, which is typically run in school cafeterias or community centers throughout the state, has been operating at the church next door because of staffing issues and building availability.

“They do a lot of maintenance and that in the summertime, in the kitchen,” Canny said.

But because Salem had the certified kitchen and the space, it made sense to run the program there.

“The reason they have it here at the church is [because] it’s a central location of the kids and it’s close to the school,” Canny said. “It’s kind of like in the middle of town and there isn’t a place at the school to have it in the summer time because they’re doing construction in the kitchen and throughout the school they have to get done for the following year.”

Meals are based off the Lake Mills Community School menu.

“I take those recipes and those meals and put them into the meals for the summer time,” Canny said.

She said last year during a typical lunch day 85 to 115 kids participated.

During summer school, breakfasts are served at the school.

“As I understand, the school wasn’t able to run it over the summer,” Guttormson said. “So Lake Mills Ministerial Association, which is a combination of about six different churches, have taken on the responsibility of being administrator for the program for the past nine years.”

The breakfast offers is in grab-and-go format, with foods such as muffins, fruit and milk.

“I think it’s mostly for convenience because the kids can get that breakfast before they start their summer school program,” Guttormson said.

After providing breakfast for around a dozen students, she goes to the church to prepare lunches. And after lunch, buses arrive to take the kids back to their homes, whether in Emmons, Joice or Scarville.

“They’ll come before practice, or, if their practices are early enough, they’ll come after practice,” Canny said.

According to Guttormson, high school students who babysit will also stop by for free lunches.

“The first year when I was here I was just surprised … [at] the need for it,” Canny said.

Most of the children they see for lunches are local students and that everybody there either is a student or will be one, she said.

“It seems like it’s just a good place to check in and get to know kids better,” Guttormson said.