Court document: 3 men were sleeping when stabbed in apartment

The three men stabbed Monday morning in an apartment on East Main Street in Albert Lea were reportedly sleeping when they were attacked, according to court documents filed Wednesday. 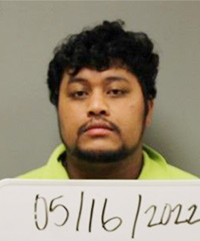 Two out of the three victims were critically injured and flown by helicopter to St. Marys Hospital in Rochester.

One of the victims remains intubated at St. Marys Hospital in Rochester and has been unable to give a statement to police. The second victim was intubated during surgery but has since been extubated. He told police he woke up to the other victim being stabbed and then he got stabbed himself. As he tried to run away, he got stabbed in the back of his shoulder, court documents state.

The victim said he believed Kasio was on “ice,” a term used for methamphetamine.

The stabbing occurred Monday morning at about 8:30 a.m. Police were dispatched to a report of an unknown emergency at 221 E. Main St. Dispatchers advised there was a language barrier, and the caller stated they needed police.

When two officers arrived at the apartment building, a construction worker told one officer “something crazy” had just happened.

The other officer made contact with two males on the front porch, one of whom appeared to have blood all over him. Fresh drips of blood were also going down the steps.

One officer went inside the building as the other officer stayed outside with the two people on the porch. Inside, the officer found a large amount of blood on the floor leading to one of the apartments.

In the apartment, two men laid lifelessly on the floor in the living room, and a female witness told the officer they were stabbed while they were sleeping a few minutes prior, the report stated. The suspect had left out of the back door.

One of the men had a stab wound to the chest and was pale, cold and clammy. He had difficulty breathing and was moaning with each breath. He also had a deep stab wound to his right arm, the report states. The officer put gauze on the chest wound and placed a tourniquet on the victim’s upper arm.

The second victim opened his eyes and looked at the officer as he checked for a pulse. He, too, had been stabbed in the chest. The officer asked the man who had done this to him, and he responded, “CK.”

Both men were taken out of the residence and to the emergency room at Mayo Clinic Health System in Albert Lea.

The third victim, who had received an injury to his hand, was found by following a trail of blood into an apartment at 133 W. William St.

Kasio has reportedly initially fled the scene but turned himself in at the Law Enforcement Center a little less than three hours afterward. Court documents state he had dried blood on his hands.

He has not given a statement to police.

The female witness told police Kasio came to Albert Lea from the state of Washington and was living with her. She said he was always asking for money, and if he wasn’t given money he would threaten to stab them, court documents state.

She told police that the night before the incident, she has told Kasio to calm down and that he kept walking in and out of the house. She noted he had not slept in two nights.

She said she asked him to be nice to the people staying with her, noting that some had just come from Hawaii and were staying with her as she tried to help them find a place to live and a job.

In talking about bail, Assistant Freeborn County Attorney Abigail Lambert said Kasio had been arrested in Hawaii in 2018 and had moved to Albert Lea in April. She said he had been employed at a local manufacturing facility but was fired after one week for allegedly trying to get drugs from other employees.

Lambert also talked about the seriousness of the offenses and that she felt Kasio was a flight risk and a risk to public safety. She said if Kasio was convicted of one of the first-degree assault charges and had no criminal history, he would be sentenced to a presumptive prison sentence for 74 to 103 months.

Freeborn County District Court Judge Christy Hormann followed the recommendations of Lambert and set unconditional bail at $800,000 with no option for conditional bail.

Though she acknowledged that Kasio ultimately turned himself into authorities, she was concerned he had initially fled the scene. Hormann also pointed out the short time Kasio has lived in Albert Lea and his ties to the states of Washington and Hawaii.

Kasio appeared from the Freeborn County jail and spoke through an interpreter. He asked for a public defender.

Kasio is next slated to appear in court at 1:30 p.m. May 26. At that time, Hormann said whichever judge is present would consider conditional bail options with Kasio’s public defender.