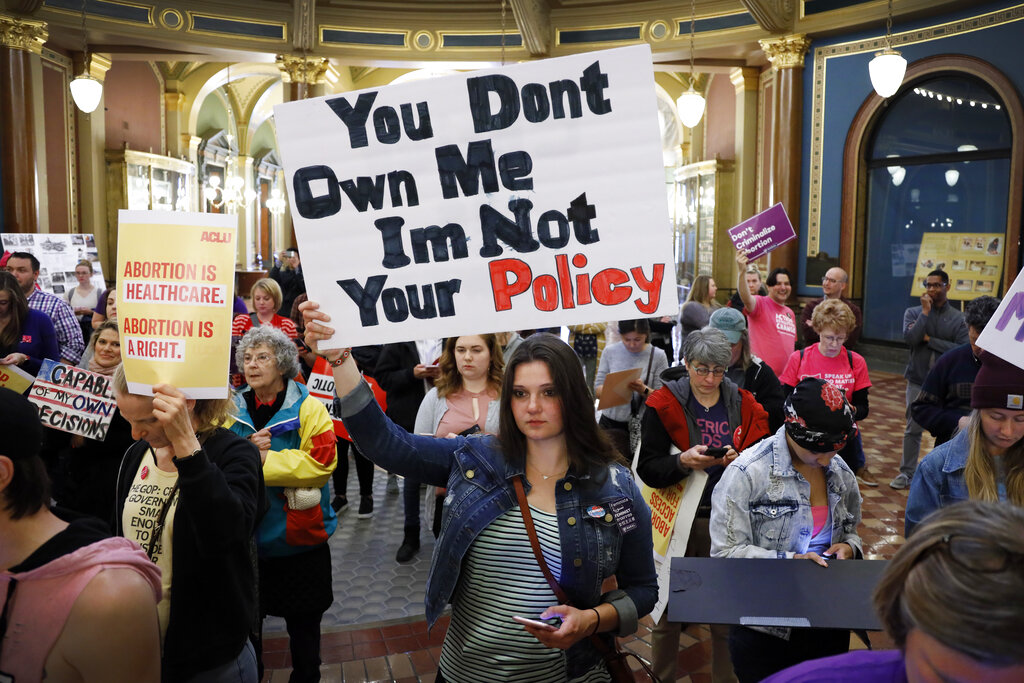 There’s just one catch: a 2018 Iowa Supreme Court ruling that established the right to abortion under the state constitution.

“I don’t know if the people of Iowa know that things aren’t going to change immediately if Roe. v. Wade is overturned,” said state Rep. Sandy Salmon, a Republican and farm manager from northeast Iowa who has made abortion restrictions a cornerstone of her five legislative terms.

Supreme courts in a handful of states, including others controlled by Republicans, have recognized the right to abortion. But in no state is the issue more immediate than Iowa, where Republicans are calling for a state high court with new, conservative justices to reverse a decision made just four years ago.

The Iowa court’s decision, due within weeks, is an example of the complexities that loom in states should the U.S. Supreme Court overturn its 1973 decision that legalized abortion nationwide. Specifically, it highlights the inevitable confrontation between new abortion bans being prepared in anticipation of Roe’s reversal and state constitutions.

“There are states where this is to some extent unknown and an issue that state courts will likely have to confront,” said Helene Krasnof, vice president of public policy, litigation and law for abortion rights advocates Planned Parenthood Federation of America. “But this is an issue that’s present in Iowa in this very moment.”

The Iowa Supreme Court decision that’s under consideration struck down a 2017 law signed by then-Gov. Terry Branstad requiring a woman to wait 72 hours before receiving an abortion. The court ruled 5-2 that an abortion is a fundamental right protected by the state constitution’s guarantee of liberty.

“Autonomy and dominion over one’s body go to the very heart of what it means to be free,” wrote then-Chief Justice Mark Cady, who died in 2019. “Implicit in the concept of ordered liberty is the ability to decide whether to continue or terminate a pregnancy.”

Since that decision, Branstad’s successor, Republican Gov. Kim Reynolds, has signed other restrictions, including outlawing abortion once cardiac activity is detected in the embryo and requiring a 24-hour waiting period. Both measures were struck down in state district court. Reynolds appealed the waiting-period decision to the Iowa Supreme Court last year.

In the years since Cady’s opinion, Reynolds has appointed four of the court’s seven members. The Republican-controlled Legislature also gave her more control over the process of selecting the panel that recommends potential nominees.

Drake University Law School professor Sally Frank said if the court were to overturn a right established only four years ago, it “would give an even more political look to a decision here than the U.S. Supreme Court.”

Yet abortion opponents argued that court rulings in a half-dozen states, including Iowa, are examples of laws inappropriately established by judges rather than elected officials.

“This case presents the opportunity for the Iowa Supreme Court to return the issue back to the people to decide through their elected representatives in the Legislature,” said Mallory Clark, a spokeswoman for Susan B. Anthony List, a national abortion rights opposition group.

Polls indicate support for keeping abortion legal. The Des Moines Register Iowa Poll found in September that 57% supported keeping abortion legal in most or all cases, compared with 38% who said it should be illegal in most or all cases. According to AP VoteCast, a 2020 survey of the electorate, 65% of Iowa voters said the U.S. Supreme Court should leave Roe v. Wade as it is, while a third said it should be overturned.

Reynolds has said she is “proud of the legislation she signed in 2018,” including the ban on abortions once cardiac activity is detected, as early as six weeks and before many women know they are pregnant. While the measure included exceptions to protect the life of the mother and for pregnancies that are the result of incest or rape, Reynolds recently declined to endorse any exceptions.

“I’m not going to set any parameters,” she told reporters last week. “We have a ruling before the Iowa Supreme Court and we’re going to wait and see what they do, and that actually will affect what our next steps are moving forward.”

Supreme courts in Alaska, Florida, Kansas, Montana and Minnesota have ruled that their constitutions protect the right to abortion. Among them, Republicans hold legislative majorities and the governorships in Florida and Montana.

In Montana and Florida, challenges to abortion restrictions are before those state’s supreme courts.

Majority Republicans in the Kansas Legislature are seeking to invalidate a 2019 state Supreme Court decision that declared access to abortion a “fundamental right” with a referendum on the August primary ballot to amend the state constitution.

The measure needs a second approval in the Legislature and will likely come up next year, Salmon, the GOP state lawmaker, said. If approved it would go before voters, probably in 2024.

It’s the removal of the abortion guarantee in the 2018 court ruling that would clear the way for lawmakers to ban the procedure, Salmon’s ultimate goal.

“That means that abortion would not be a service offered in this state,” Salmon said.