On Wednesday, May 4th, 2022, David Joseph Paal Sr. passed away at the age of 81 years old. Services will be private with family. Interment will be in Rosehill Cemetery in Wells, MN. Nasinec Funeral Home in Wells is entrusted with arrangements. Please see www.nasinecfh.com to leave online condolences. 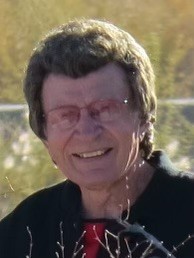 David was born on December 26th, 1940, in New Ulm, Minnesota, to Henry and Ella Paal. He grew up in Currie, Minnesota, where he later graduated from Immaculate Heart – Mary Parish. After graduating from the Minnesota School of Business, he went on to further his education at Louisiana State University.

After his college graduation he moved to Hoyt Lakes, Minnesota. He soon opened his own department store in Wells, Minnesota, in 1968. While working in Wells, he met his soulmate, Sandra Culbertson. David and Sandra were married on November 15th, 1969. They had two children, David Jr., and Susie.

When his children were young, David loved to travel “out west” as a family. He looked forward to planning the annual trip every year. He also loved cars, NASCAR, Johnny Cash, and Las Vegas.