David Walter Mutschler, age 90, of Kiester, MN, died Tuesday, May 25th, 2022 at Mayo Clinic Health Systems in Austin, MN. A Funeral service will be held at Open Doors United Methodist Church in Wells on Saturday, May 28, 2022 at 11:00AM, with Pastors Leistra and Woolverton officiating. A visitation will be held tomorrow Friday, May 27, 2022 at Nasinec Funeral Home & Crematory in Wells, MN from 4:00-7:00PM. Visitation will continue one hour prior to the service on Saturday at church. Interment will be in Fairview Cemetery, Kiester, MN. The family requests memorials to the Kiester American Legion Post #454 or Fairview Cemetery of Kiester. Nasinec Funeral Home in Wells is entrusted with arrangements. Please see www.nasinecfh.com to leave online condolences. 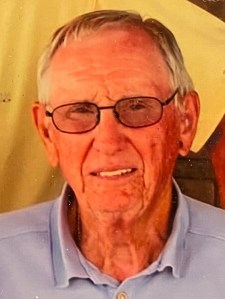 David was born March 18, 1932 the son of Walter and Genevieve (Heitzeg) Mutschler. He graduated from Kiester High School in 1950 and continued his connection to classmates and friends throughout his life. David married Priscilla Meyer in 1953. He served as an MP in the Army, stationed in New Jersey and Georgia, before returning to Minnesota to the family farm. David and Priscilla were blessed with three children – David Jr. Mutschler (Carol), Danny Mutschler and Cathy Mutschler. After the untimely passing of Priscilla, David married Marjorie (Gaffey) Van Engelenburg in 1969. Marjorie brought four children with her into this ‘before it’s time’ modern family, coined by family insiders as the ‘Brady Bunch before the Brady Bunch was cool.’ They are Randy Van Engelenburg (Vickie), Kathleen Trytten, Jim Van Engelenburg and Terry Van Engelenburg (Betty). In recent years, David spent time with a special friend, Barbara Rofshus. Their bond brought mutual companionship and joy with common interests in dancing, travel and family activities

David farmed until he retired in 1995. After moving to Kiester, he spent many years as a school bus driver for the United South Central Public Schools, telling story after story about his experiences. During his later years, he became a full-time landlord and ran a successful yard care/snow removal business. David was a member of the Kiester American Legion Post #454, participating throughout the years in color guard activities for Memorial Day, funerals and parades. He was also a member of the Masonic Lodge of Albert Lea, Minnesota.

David’s interest in sports began during his high school years where he excelled in football, basketball and baseball. He was a life-long sports fanatic, following the Twins, Vikings and Timberwolves daily. David was an avid bowler, traveling to many leagues and events throughout his years. He was also an active member of the Rice Lake Golf and Country Club and enjoyed golf multiple days a week. His friendships from bowling and golf brought him much joy. When able, he watched his children, grandchildren and great-grandchildren in countless games, leagues and tournaments.