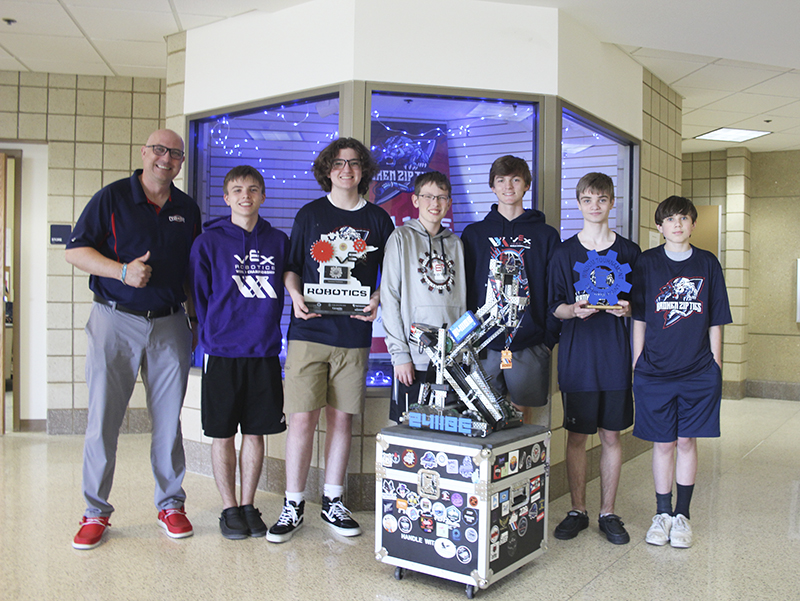 Burke Egner and the high school’s robotics team — the Broken Zip Ties — recently returned from a world competition in Dallas.

“The way that the robotics works, we compete in a program called VEX,” he said. “VEX has tournaments throughout the state of Minnesota that are regionally qualifying events.”

According to Egner, teams qualified for a world tournament by competing in a regional tournament, where they won a tournament at Windom. That earned them a place in the state tournament, which was held in St. Cloud.

“Students attended the state tournament, and they were [semifinalists] at the state tournament, which came with an invitation to the world championship, which is a huge accomplishment for this team as they are a first-year robotics team competing in VEX at the high school level,” he said.

The eight-student team took a van down to the tournament, which took place at the Kay Bailey Hutchinson Convention Center from May 5 to 7.

There were 800 teams from around the world competing, and the competition was broken down into 10 divisional tournaments with 80 teams in each division. The Broken Zip Ties were placed in the Engineering division.

“With those 80 teams we had 11 qualification matches that the students had to compete in where they’re ranking for qualification places,” he said.

During the matches, robots competed against each other to collect and stack as many rings as possible.

“A little bit more intense is that these are robots that had already won … either their state tournaments or others, so the competition was fierce,” he said. “A lot of high-quality robots at this level.”

For being the first time competing in VEX Robotics competition at the high school level (let alone a world competition), the team placed 30th in their division. Previous to VEX, the robotics team competed in First Robotics.

“Unfortunately, 30th was not high enough to continue on into the divisional playoff rounds, so that was the end of our world championship bid,” he said. “But it was still an amazing turnout for our students for their first year.”

This was also Egner’s first time competing in a world competition, but he wasn’t surprised the students placed so well.

He did say it was a little intimidating at first with the sheer amount of teams and the language barriers.

Freshman Brecken Koepke, who served as a builder and competition manager this year, was on a robotics team in middle school.

“I decided to join robotics because I have [always been] interested in engineering and electronics and building things,” he said. “So I decided joining robotics would be a fun way to express that with some of my friends.”

He described the experience as amazing and said it was fun to be in a convention center with people who liked the same things he did.

Paul Hillman, a junior at the school, served as a scout, visiting other teams and asking questions about other robots. He was also a laborer.

Hillman saw joining as a way to stay active outside school.

He was also surprised by the amount of people at the tournament.

Freshman Maxx Richards worked on building and designing the robot as well as programming. Like Koepke, he was on First Robotics in middle school and always enjoyed building things.

“When I came to the middle school I saw there was a robotics team started,” he said. “I was like, ‘Oh, this is the perfect opportunity to do something I love.’ So I joined it, and I had some friends doing it, so that was a great opportunity.”

Doing robotics, he said, has provided him with a range of skills, including communications, programming, design and maintenance. The engineering notebook he has worked on has also helped teach him how to document properly.

Richards said he might go into a career designing prosthetics, and thinks the skills he is gaining would benefit such a career.

“There’s such a wide range of skills that could be useful in a future career,” he said.

For Egner, the best part of the competition was the camaraderie.

“My favorite part of this whole journey would just be how the team has really come together,” he said. “A lot of these kids really didn’t hang out or talk much or really do a lot together.”

Next year’s VEX Robotics challenge will be focused on launching disks at a goal, something Egner described as akin to frisbee golf. And because there were no seniors on the team this year, everyone could return.

“One of the things that’s happened is when you do well, as in anything, it generates interest, and so we’re already starting to get a lot of interest in joining the robotics program for next year,” he said. “When we start the school year next year, we’ll hope to see many more students coming.”