Farmers represent only 1% of the nation’s census. Whether organic, conventional row-crop or livestock farmer, they are often an isolated, self-reliant population, full of the utmost pride. These producers are currently experiencing significant occupational stressors. Farmers and their families generally live in a constant state of fear for the livelihood of their grain and/or livestock business. A farmer’s stress primarily focuses on various financial burdens due to the failing agricultural economy over the last decade and extreme weather conditions. 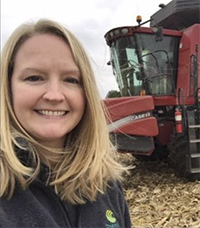 According to the U.S. Department of Agriculture Census of Agriculture, during the peak of U.S. farms in 1935, there were 6.8 million farmsteads with the average farm being 155 acres. By 2017, this has continued to plummet to 2.05 million farms, with the average size of the farm increasing to approximately 444 acres. In 2016, it was reported there are only about 16.65% of the U.S. landmass that is tillable, and between 1962 to 2012 farmers lost 31 million acres of tillable ground to development.

In 2017, the average age of the U.S. farmer was 57.5 years old, with 64% of producers being male, and 36% being female. Aging farmers need to be able to pass on their immense knowledge and farmland to the next generation of producers; however, succession of the family farm is yet another complicated issue that takes several years to do without financial hardship. Beginning farmers (under the age of 35) account for only 27% of U.S. producers. This is due to the massive financial risk of entering farming. Many young farmers additionally have the stress of working another job off the farm.

With a decrease of farms and farmers, and an increased number of people in the world to feed, there is more need and pressure to produce more by each producer or rancher. Numerous advancements have been made in modern farming to enhance sustainability, production efficiency, distribution, health and safety, and infrastructure, yet many of these practices have been demonized. If there are no farms or farmers, there will be no food.

“The farmer is the only man in our economy who buys everything at retail, sells everything at wholesale and pays the freight both ways.” — John F. Kennedy

Over the last two years, COVID-19’s ripple effects of ongoing supply-chain issues, global trade instability, high fuel/diesel prices and shortages of fertilizer, various inputs and farm machinery/parts have continued to complex an already stressful trade.  Farmers today are particularly anxious as the 2021 fall season ended in drought, and spring of 2022 is starting with a cold and wet spring with further potential for drought being predicted. Production is on a global level and Ukraine is one of the world’s top agriculture producers. They grow the same crops as the Midwest. With the war going on between Ukraine and Russia, Ukrainian farmers have planted only about 31% of their normal production, and this will affect food prices worldwide. Added current stress include the threat of a recession, with interest rates beginning to creep higher is especially concerning. In the 1980s, interest rates reached 20%. It took farmers decades to get out of debt, while others lost their farms in the farm crisis. There may be much weighing on your local farmer’s mind, as many of your older farmers experienced the despair of the 1980s farm crisis.

Farming is risky business, requiring higher inputs than ever before for grain, livestock and dairy operations. If the crop yields are low or your animals become sick or even dies, the producer’s return on investment is poor or a complete loss. Each producer’s financial situation is unique, some are struggling more than others, but most producers are feeling financial strain.

Grain producers try to maintain hope that their lenders will continue to provide a loan to put in another crop, but more farmers are being declined due to a lack of collateral or lending is considered too high of risk. This has led some producers to sell a portion of their land, go into foreclosure or file for Chapter 12 bankruptcy, which is the ultimate loss to any farm family. The dairy farmer has been hit particularly hard over the last decades. In Wisconsin, 382 dairy farms sold out in 2018 over an eight-month period, a 30% jump from 2017. This is because it costs a producer $1.90 to make a gallon of milk, but their return may be as minimal as $1.35.

Beyond the potential financial problems, grain farmers experience unpredictable weather, volatile markets, noxious weeds and concerns for soil, plant and grain health. Livestock owners never get a break, they need to constantly plan to keep their animals safe in cold weather or extreme heat, ongoing building repairs and lot/yard upkeep to assure the animals health and safety. While dairy producers are the most tied to their farms, as they need to milk their cows anywhere from two to four times a day.  It seems recently there has been an increase in extreme weather conditions including derechos, tornadoes/high winds, drought, significant temperature changes and heavy rains, resulting in flooding. Weather is an aspect which no farmer possesses any control, yet it is constantly affecting their farms.

Over the years more farmers and spouses required a working income — off the farm. This is often done to supplement income, pay for health insurance and to potentially create a retirement fund. For those farmers who do not work off the farm, the producer is considered self-employed, and the cost of health insurance is an astronomical expense.  Many farmers avoid going to the doctor or mental health provider altogether because of high deductibles and/or high co-pays for medications.  Health care is just another expense they cannot afford.  Farmers are in desperate need of quality health care as they are prone to injuries including farm accidents, musculoskeletal conditions, agricultural respiratory disease, noise-induced hearing loss, as well as various types of cancers.

Economic health has a vast impact on the farmers emotional and mental health, which later often manifests into physical health complications. Today, farmers are experiencing many of the same struggles experienced in the 1980s, symptoms of depression, anxiety, as well as alcohol or drug abuse, domestic abuse and gambling. As stressors build, symptoms of depression and anxiety may increase, a farmer may debate suicide to escape their financial debt.  Suicide rates among farmers are higher than any other occupation. Male farmers are more than 50% more likely to take their lives than they were in 1982, at the peak of the original farm crisis. The suicide rate for farmers more than doubles the statistics of U.S. military veterans and the general public.

If you are a farmer or farm family member and you are struggling, or you know someone who is struggling, please know that there is help. Talk to someone you trust, who will simply “listen actively” and not interrupt or see a therapist.

If someone reaches out to you, just listen. Do not offer any ideas or solutions, instead ask how or if you can help, and ask them if they are thinking about hurting themselves.   Often getting support through talking about how you’re feeling, getting good quality sleep, eating healthy, taking time for prayer/meditation, deep breathing, physical exercise, developing a hobby, and limiting alcohol/drug use, can help reduce mental health symptoms.