Funeral services for Harriet Louise (Frydenlund) Skaar, age 102, of Hayward, will be on Thursday, June 2, 2022, at 10 a.m., Hayward Lutheran Church in Hayward. Pastor Josh Enderson will officiate. Burial will be in Hayward Cemetery following the funeral. Visitation will be from 5:00 to 7:00 p.m. on Wednesday, June 1, at Bayview/Freeborn Funeral Home and one hour prior to the start of the service at the church. Online condolences may be left at www.bayviewfuneral.com. 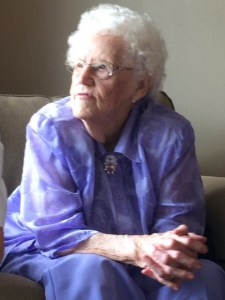 Harriet passed peacefully at her beloved home on the farm near Hayward on Wednesday, May 25, 2022, surrounded by family members.

Harriet was born on April 30, 1920 on the Frydenlund family farm south of Hayward, the youngest of twelve siblings, to John and Nora (Alm) Frydenlund. She attended country school in District 36, Hayward Township, through 8th grade and then attended Albert Lea High School and graduated with the class of 1938. During the World War II years, Harriet supported the war efforts by working for a munitions plant in the Twin Cities and then returning to Hayward to assist her parents and brothers with work on the farm.

Harriet was united in marriage to Ashle Skaar on September 9, 1947 at Hayward Lutheran Church where they were life members. Together they raised a family of seven children and operated a successful productive dairy farm with prize-winning Guernseys. Harriet balanced the demanding tasks of a farm wife with raising a large family. Harriet and Ashle were firm believers in the importance of improving yourself through education and encouraged all their children and grandchildren to do well in school and seek higher education. She was known for her excellent cooking skills and created delicious meals for large groups at harvest time or for family members during holidays. Harriet was an active member of Hayward Lutheran Church and was involved in church organizations including WELCA, Mission Circle, and Bible study groups.

Growing up with five athletic brothers, Harriet always wanted to play along with the boys when she was young. She became an accomplished golfer, bowler, and softball player. In later years, Harriet enjoyed team bowling and continued to win local golf trophies into her 70’s. Harriet was an avid fan of the Minnesota Twins and Vikings.

Over the years, Harriet and Ashle enjoyed traveling to Disney World, Washington D.C. and across the western part of the United States. The highlight of their travels was a trip to Europe which included visiting farms in Norway where their immigrant ancestors had lived.

She was preceded in death by her husband of 65 years Ashle, her parents , five sisters, six brothers, and many sisters-in-law and brothers-in-law.

We say goodbye to our dear mother with great sorrow. She was a guiding light throughout our lives. We were fortunate to have her with us for so many years. Mom was a true example of a life well-lived and growing old with courage, determination, and grace.

A special thank you to our brothers on the farm who provided such loving care to mom, so that she could stay in the home that she loved to the very end of her life. Also thanks to Mayo Hospice for the support and compassion they provided our family with mom’s home care. Memorials suggested to Hayward Lutheran Church, Hayward Cemetery, or to a charity of your choosing.