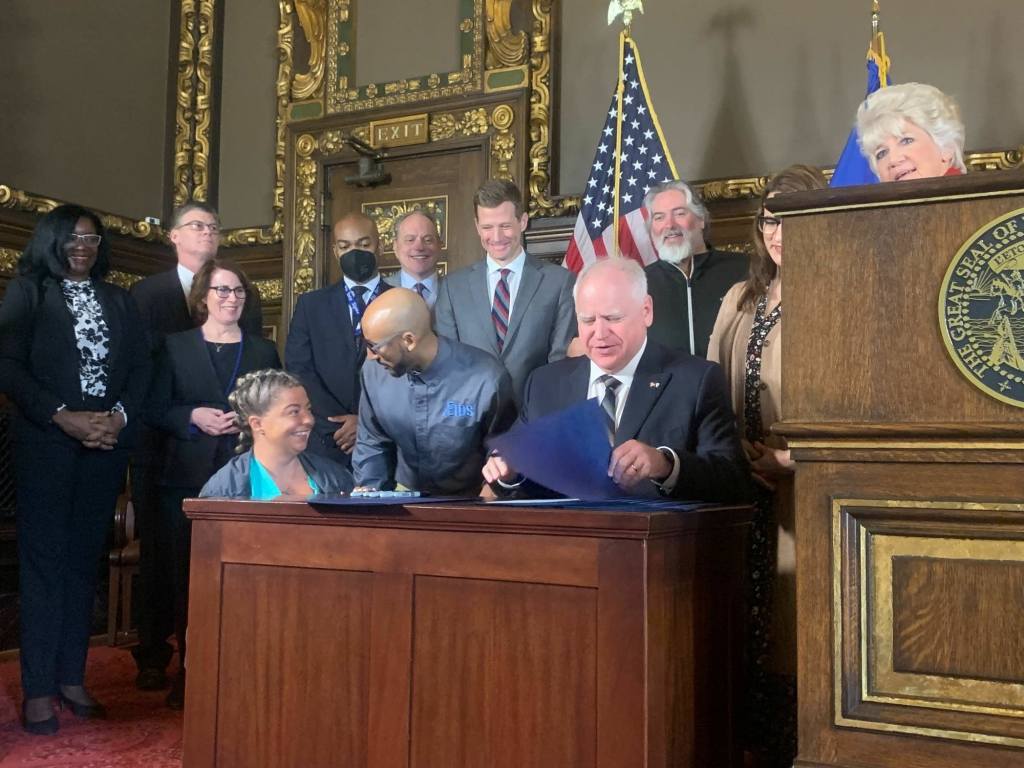 With front-line workers and a bipartisan group of lawmakers looking on, Gov. Tim Walz held a ceremonial signing of a bill to provide worker bonuses and replenish the state's unemployment trust fund on Monday, May 2, 2022. Brian Bakst/MPR News

Time is slipping away at the Minnesota Capitol, with an adjournment deadline falling three weeks from Monday.

Lawmakers and the governor finally reached a deal late last week on pandemic hero pay and on refilling the unemployment insurance trust fund. But there are more items still unresolved, with the House and Senate far apart on what to do with the remaining budget surplus.

Leaders of the House and Senate had a big breakthrough last week with a $3.4 billion dollar plan to shore up the unemployment account. It includes $500 million for checks to workers who took personal risk during the pandemic to deliver services and care to others.

The plan passed on Friday by comfortable margins. Gov. Tim Walz immediately signed it. He held a celebratory, ceremonial signing event Monday morning with lawmakers from both parties and groups that pushed hard for each part of the compromise.

“The legislative process can be frustrating. It’s not meant to be fast. And it’s not meant to run over things. It’s meant to be deliberate,” Walz said. “This group of legislators, leaders and advocates up here found a way to reach a compromise that served our frontline workers, our small businesses, and continue to deal with the COVID pandemic. That is no small thing.”

Businesses that forked over more money to fortify the unemployment account should get rebates and credits this summer. DEED Commissioner Steve Grove said his agency hopes to alert businesses how much they’ll be getting back within the next two weeks.

The pandemic bonus checks will probably also go out in a few months.

Around 667,000 people from health workers to child care staff to grocery store employees could get a $750 check.

Mary Turner, president of the Minnesota Nurses Association, said the awards might not be a financial windfall but they are a valued measure of appreciation.

“It may not seem like a lot. But I’ll tell you what, that’s going to be that 750 to the median income of Minnesota – that equals a month’s rent, that equals groceries,” Turner said. “That’s money that can be put back into their savings accounts. So it is important.”

Those who believe they are eligible will have to go through an application and verification process. Labor and Industry Commissioner Roslyn Robertson said that window will span two months once a system is active. She said total turnaround time will be 10 to 12 weeks.

“We will be moving as quickly as we can to ensure that No. 1 we are doing the outreach to and to make employees aware that they can apply,” she said.

The state has established a new website for eligible workers to keep tabs on the reward process. It’s frontlinepay.mn.gov.

It remains to be seen if that agreement will pave the way for other major pacts before adjournment.

There’s still some $7 billion to divvy up. If lawmakers want deals, there’s not a financial impediment.

“I know that they’re keenly interested in at a minimum passing a couple of budget bills and a tax bill,” Hortman said. “So I think there’s still plenty of leverage on the table.”

She said a broad framework must be in place by May 13 to leave time for writing up the final bills and passing them.

Miller agreed last week that the unemployment and pandemic worker deal bodes well for other negotiations.

The biggest is tax cuts versus new school spending.

The Republican-controlled Senate has already adopted more than $8 billion in tax cuts over a few years’ span. It’s mostly in the form of income tax cuts.

Compare that with what will come to a vote in the DFL House on Wednesday — about $3 billion through income-targeted credits and property tax relief.

But on the flip side, Republicans aren’t committing much more to schools — they have $30 million for the current year for literacy efforts.

By comparison, Democrats have more than $1 billion extra for schools.

For his part, Walz hopes to secure billions of dollars worth of tax rebate checks. But neither chamber’s tax proposal adopts that.

He said Monday that he’ll insist on a rebate as part of any tax-cut agreement.

“I would argue that relief to all Minnesotans is necessary. I think it’s the most fiscally prudent way to make sure we don’t create a deficit situation in years out. Minnesotans are overwhelmingly supportive of it,” Walz said. “And I’m willing to compromise, but I’m not going to compromise on a top priority of mine.”

Walz wants a lot more for schools, too — basic aid and other items, such as mental health and school meals.

The DFL governor is adamant that he won’t call lawmakers into special session if their negotiations last past the final day of the session.

Walz is not the first governor to draw that line. It does light a fire under the Legislature, but don’t be shocked if there is a brief special session to ratify a late breaking deal.

Aside from the budget, there are other bills of note that could make it through or falter.

One is the sports betting proposal to allow Minnesota to join the growing number of states where that is legal.

It’ll come down to where that gambling is allowed. The House proposal pretty much limits it to tribal casinos; the Senate wants to include horse tracks.

It’s possible the House will vote on the measure this week. The Senate bill is stuck, given opposition from lawmakers who don’t want the tribes to have a monopoly and those who don’t want to expand legal gambling.

Along the same lines is liquor legislation. The House is advancing a plan to allow more takeaway growlers and Minnesota-made liquor at distilleries. The Senate hasn’t done much on that front. It could be a late-breaking agreement.