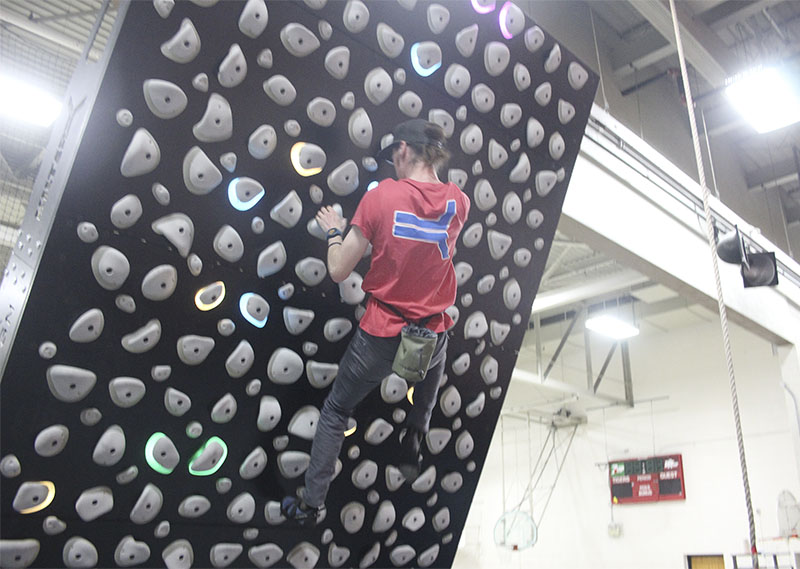 According to Alex Hagen, the kilter board took about two weeks to assemble. Alex Guerrero/Albert Lea Tribune

After a little bit of a wait, a new climbing apparatus has been installed at the Brookside Education Center.

The equipment, called a kilter board, is a small climbing space that has holds that are lit by LED lights, said Alex Hagen, senior lead staff at Albert Lea Community Education Experiential Ed.

Assembly for the board started April 8 and was completed April 24.

According to Hagen, the climber uses an app to select holds to use, with the board illuminating the holds to use to climb.

“There is a database of climbs that people have created on other kilter boards around the world,” he said. “I think there’s over 20,000 different combinations of holds that are in that database right now.”

Hagen said a kilter board serves as a great training tool for advanced climbers but is also accessible to everyone.

“It expands the climbing area of our rock gym exponentially,” he said. “With that large database of different routes it also expands our connection to the climbing world.”

Hagen said the board, which opened to the general public Tuesday, should see a lot of use. He also had the opportunity to test it out in advance of its general opening.

“I’ve climbed on boards like this in the past,” he said. “They’ve always been super fun. It’s always with the ability to change which LEDs are lit up and change the routes. You can always find something new.”

According to Hagen, because holds don’t have to be changed, route-setting is also instant with the board, something that’s not possible with a top-roping wall.

The board, which took a few weeks to assemble, is 8-by-16-feet, and that size allows them to exponentially expand climbing opportunities.

“It’s something that we, in the fall, put in for as an idea for expanding programming,” he said. “So kind of mulled it over over the winter. Our director, Chris Chalmers, did a ton of research online, a lot of correspondence … trying to figure out if something like this would fit our space and be doable for us.”

There was a problem when it arrived though. They received an incorrect part.

“Got it pretty much all put together and then found out that we [had] an incorrect part,” he said.

So they contacted the kilter board company, and they shipped the part over.

The kilter board is in the rock gym at Brookside Education Center, and according to Hagen there are two others in the state. The board has the ability to go from 0 degrees overhang to 70 degrees.

“It’s kind of a way to reach out and expand Albert Lea into the world of climbing,” he said.

According to Chalmers, the board cost about $30,000, with money for it coming from Community Education enrichment funds.

Participation at the rock gym and Boathouse for the next two years is free for all kindergarten- through 12th-grade students, but pre-registration is required (registration is at alschools.ce.eleyo.com). Hours for the rock climb are 6 to 9 p.m. Tuesdays, Fridays and Saturdays.

“I’m just super excited to have the opportunity for people in Albert Lea to experience the kilter board,” Hagen said. “I think it’s a great addition to our community and hope to see people (use it).”