Protesters in Albert Lea rally for right to choose

A supporter holds up a sign during the "Rally for the Right to Choose" event, which happened Thursday night outside the Freeborn County Courthouse. Alex Guerrero/Albert Lea Tribune 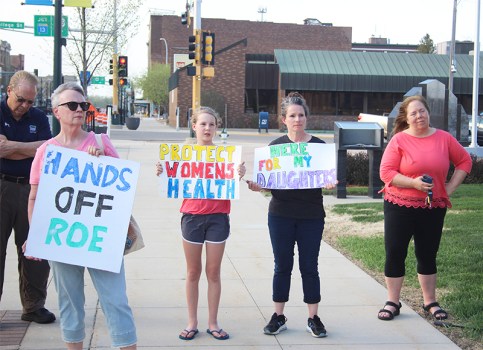 The rally brought a wide range of people together. Alex Guerrero/Albert Lea Tribune 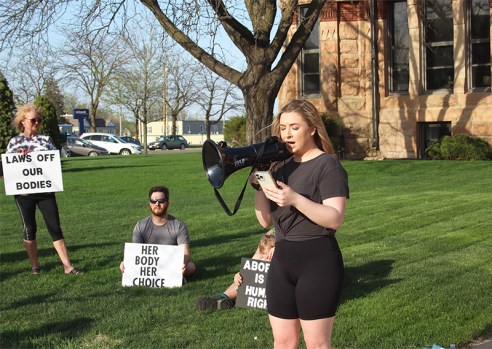 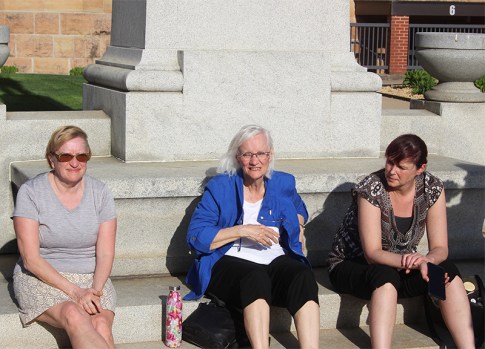 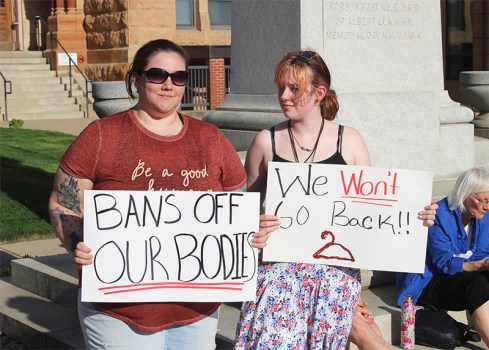 Many people at the rally brought their own signs signifying their thoughts on the Supreme Court's leaked draft that would overturn Roe v. Wade. Alex Guerrero/Albert Lea Tribune

Roughly two dozen people gathered at the Freeborn County Courthouse Thursday night in a peaceful protest of the Supreme Court’s leaked draft decision that would stride down the landmark 1973 Roe. v. Wade decision, which protects a pregnant woman’s liberty to choose to have an abortion.

The protest, “Rally for the Right to Choose,” was organized by Hannah Goodemann.

“In light of learning that the U.S. Supreme Court is going to strike down Roe v. Wade, I thought it was important that we come together as a community and make it known that we need to keep … abortions safe and legal,” she said before the event. “It’s very scary and heartbreaking news about Roe v. Wade, and I feel that we really need to make our voices heard that we do not support Roe. v. Wade being overturned.”

She added people needed to do everything possible to keep safe and legal abortions.

Goodemann also said overturning the decision wouldn’t end abortions and believed no one else had the right to decide what a person does to their body.

“It is a very dangerous path that we are going down,” she said. “We are literally being stripped of our rights. This is very clearly an attack on women, but this issue does also affect trans men and non-binary folks with uteruses as well, so this is life or death honestly.”

Goodemann described herself as being politically involved since being a teenager and admitted this wasn’t the first rally she organized.

“Really, there are protests happening all across the country,” she said. “So our community really wanted to come together and stand in solidarity with everyone and make sure that everyone knows that we believe abortions should remain safe and legal.”

Mary Hinnenkamp, who is running for House District 23A representative, agreed with Goodemann and said women felt they had the right to control their bodies, and added she remembered a time when women had far fewer rights.

“That’s not a right that anyone should take away from them,” she said.

Jennifer Vogt-Erickson was one of the speakers at the rally.

“I have always been for women’s right to choose, for whatever reproductive rights are best for them,” she said.

Vogt-Erickson used to be active in her school’s women’s resource center in college.

She was also worried for her daughter, who may not have the same rights as she did.

Beyond her daughter, she talked about her great-aunt, who almost died from an illegal abortion.

“She had gone to Washington, D.C., during World War II to work in the War Department, which is now the Department of Defense,” she said. “She had a job overseeing the telegrams to families of soldiers who were wounded or killed in the war.”

And as a young woman, her great-aunt went on a date with a man who raped her. She later learned she was pregnant.

“She wanted to get an abortion, and of course the only type available at that time in the 1940s was an illegal abortion,” she said. “She had been able to find one, and the procedure caused her to hemorrhage, and she bled so much that she lost consciousness and the abortion provider panicked and (because they had committed a criminal offense) they thought they were going to have a dead body on their hands so their conclusion was that they should dump her body into the Potomac River.”

Vogt-Erickson said she thinks they would have done so if her great-aunt’s sister wasn’t there.

For Goodemann, a successful rally would have been even one person showing up.

“People are terrified,” she said. “I mean people are legitimately terrified. I’ve had conversations with family and friends that have just ended in tears because what’s going to happen next is a big part of it, too.

“Are all states going to ban it, are more rights going to be taken away? It’s a very, very scary time.”

According to the New York Times, if Roe v. Wade is overturned, Minnesota would be the only state in the region with legal abortion. The Dakotas have so-called trigger laws that would ban abortion if the Supreme Court allowed it. Wisconsin has a pre-Roe abortion ban that could be brought to life again, and Iowa could ban abortion past the point of fetal viability (about 24 weeks).