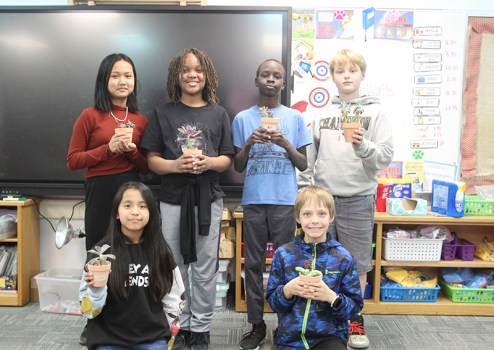 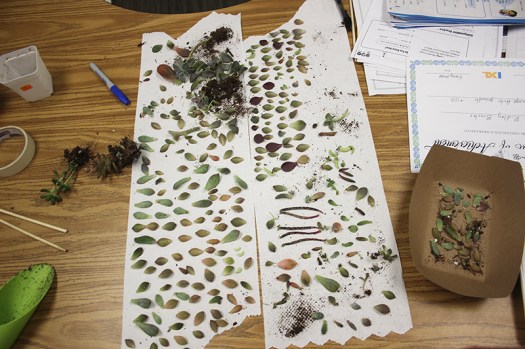 These are some of the various stages of the succulents students (and teachers) have been working with. Alex Guerrero/Albert Lea Tribune 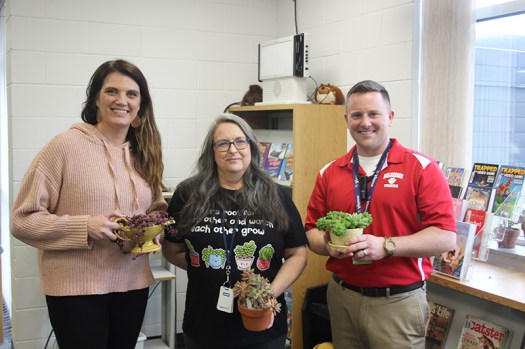 Teachers David Enser and Melinda Talamantes have been working with Cathy Thompson (middle) throughout the project. Alex Guerrero/Albert Lea Tribune 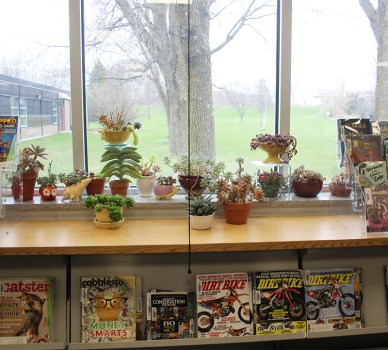 The mothers (or guardians) of Halverson Elementary School fourth graders were treated to a surprise gift ahead of Mother’s Day: succulents.

Teachers David Enser and Melinda Talamantes have been working with Cathy Thompson, the school’s library clerk, on the project since last September.

Succulents are plants that grow mostly in arid regions, typically by oceans or rocky areas.

“[Thompson] is a succulent lover to say the least,” Enser said.”She thought it would be an incredible idea and came and talked to Melinda and myself about growing succulents for the fourth graders for Mother’s Day. It snowballed from there.”

Thompson admitted to always wanting to share her interest in gardening with others.

“When I realized they were going to have a science curriculum built into their day, I thought this might be my opportunity to share my hobby with their students,” she said.

She’s always been a fan of fauna and flora, but tropical plants take up space, so she saw the project as a way to continue her interest on a smaller scale.

“It turned out to be more successful than I thought it would be with it,” she said.

Enser and Talamantes were excited about the idea, and were especially happy to see their students take an interest in Thompson’s hobby, where she has a large collection in the library.

“They admire them all the time,” Talamantes said. “So when we presented the idea to them, they were very excited to grow their own succulents to kind of see if they could keep up with Thompson.”

Students have been growing soft succulents, plants that can’t tolerate a hard freeze.

“Cathy started with providing our students with pups and containers with very … porous soil,” Enser said.

Each cup had one rooted plant, one started pup that didn’t have many roots and one plain leaf so students could see the evolution of all three processes.

Thompson provided both teachers with research to share with students on topics ranging from the amount of sunlight needed to the soil to watering.

“Our students began digging into the research of their own succulent, and then we just started a regular, weekly watering routine for them, and monitoring their growth and their color change and they just loved it,” Enser said.

By doing this, Talamantes pointed out students were making scientific observations. They also did research on where their plants came from.

When she presented the idea, Thompson figured using succulents would take the project until around Mother’s Day (as opposed to a plant like a marigold, which would mature much faster).

Talamantes was surprised by the growth of the plants, which forced the teachers to adjust the environment the plants grew in because some of them were getting larger than expected.

“That was very exciting for the kids, too,” she said.

Between Enser’s and Talamantes’ classes, 52 succulents were grown.

“The kids were very enthusiastic, and they have that … twinkle in their eye when they talked about it,” Thompson said. “That’s the kind of thing I really, really enjoy when I’m sharing something like this with somebody. Seeing some of the students — even some of the students I didn’t think would enjoy them — were fascinated by the process.

Enser enjoyed showing students unusual material that typically would not be presented to students in such a way, even though succulents were included in the content.

“Melinda and I went straight to our curriculum and started tying it to different Minnesota state standards.”

Enser and Talamantes plan to continue the project with the next batch of fourth graders next year.

“[Fourth graders] are old enough to understand how delicate things are,” Thompson said. “They just seem to be curious about the plants that I had. The teachers would ask questions about them, even before we did consider doing this together.”

And doing this project, she’s gotten Enser and Talamantes hooked on growing succulents themselves.