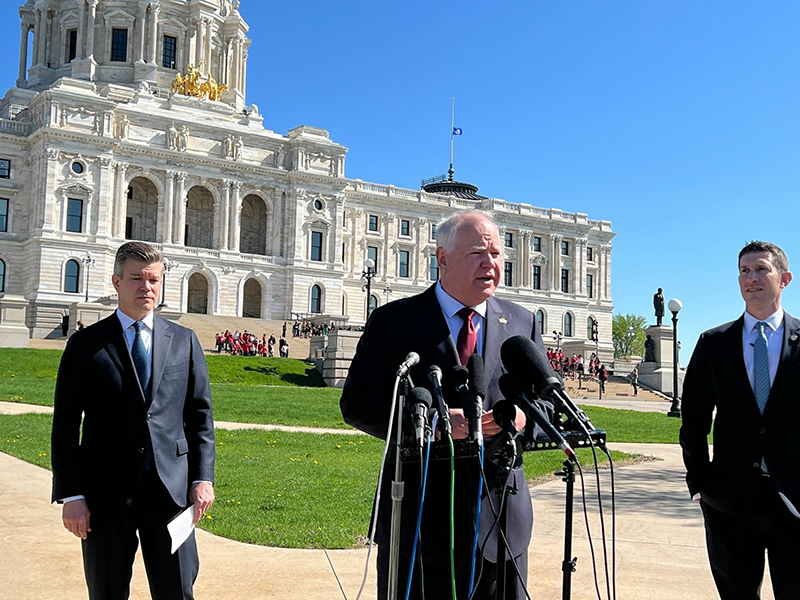 ST. PAUL — Democratic Gov. Tim Walz and legislative leaders announced Monday that they struck a bipartisan deal on a broad framework for parceling out a massive budget surplus with a week remaining in the session.

The deal would devote $4 billion to tax relief, and another $4 billion to spending on education, public safety and health care. It would also leave $4 billion in the bank to guard against downturns amid the current economic uncertainty.

The plan signed by Walz, Republican Senate Majority Leader Jeremy Miller and Democratic House Speaker Melissa Hortman includes $1 billion for education, $1 billion for health care and human services, $450 million for public safety and the judiciary, and $1.5 billion in other spending.

It also calls for $1.5 billion for a public works construction package known as a bonding bill that would use $1.4 billion in borrowing and $150 million in cash.

The leaders were expected to provide further details later Monday, but they said the full plan would be finalized in the days to come. The Legislature, which struggled all session to reach bipartisan agreements on how to use the state’s $9.25 billion budget surplus, must adjourn by next Monday.

“With an unprecedented surplus, we have the ability to make significant investments in the things that will improve Minnesotans’ lives, like health care, public safety, and education, while also providing tax cuts and putting money in Minnesotans’ pockets,” Walz said in a joint statement.

Miller indicated that Republicans got at least part of what they had been seeking — permanent tax cuts.

“Getting money back to the people has been a top priority for Republicans this session and I’m very happy we were able to accomplish this with permanent ongoing tax relief for hardworking Minnesotans, families, and seniors,” Miller said in the announcement.

Hortman indicated that Democrats also got some of the new spending they were seeking. She said in the statement that the deal includes “strong investments in families’ economic security, education, health care, and public safety.”

Before Monday, the biggest bipartisan compromise of the session was a deal that rolled back an unemployment insurance tax increases, which was a top GOP priority, and $500 million in bonuses that Democrats sought for 667,000 frontline workers who were at extra risk during the pandemic.

“This is a positive step forward, but there is a lot more work ahead of us in this final week of the legislative session,” Hortman said.

Next Monday’s end of the session will mark the start of campaign season, with both parties heading into a critical midterm election.