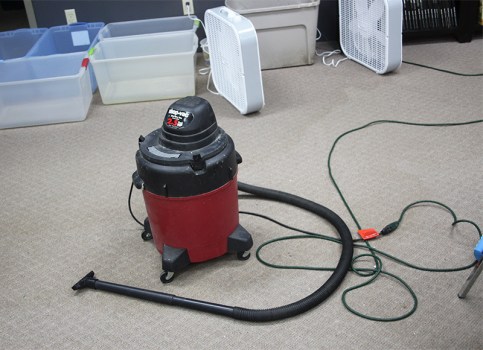 As recently as Thursday, board members cleaned up water damage inside the Albert Lea Art Center. Alex Guerrero/Albert Lea Tribune 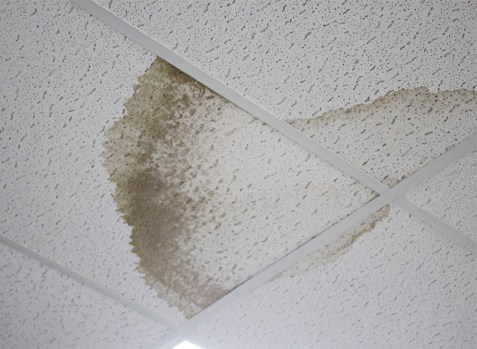 The roof at the Albert Lea Art Center, which currently has leaks and water damage, will soon be replaced. Alex Guerrero/Albert Lea Tribune

A new roof will soon be installed at the Albert Lea Art Center.

“We knew we needed a new roof when we purchased the Art Center,” said Beth Tostenson, artistic director for the center. “But with all the rains we’ve had a lot of water leaks all over the Art Center.”

Just Thursday, members of the Art Center’s board were there cleaning up.

“We had puddles, we have damage towards the back,” she said. “Hopefully we will get a new roof within [June].”

According to Charlene Marley, the center’s arts administrator, repairs will cost $66,000.

Money to repair the roof will come from grants, donations and membership money from a capital campaign, as well as a roof campaign last year.

Currently, the center is waiting for some insulation to arrive.

“As soon as that comes, they’ll start with the roof,” Tostenson said.

After that, carpet squares will be added. Tostenson said a furnace and cooling system will also be installed after the roof is replaced.

The center would also like to put in a kitchenette and upgrade the bathrooms.

“There’s little projects that we want to do,” Marley said.

Marley said when the organization purchased the building in 2018, members knew the roof needed work and that it would have to be replaced within three to five years.

“Periodically, it would leak about two years after we purchased the building,” Marley said. “We would find spots where it was leaking and stuff.”

“We had lots of snow that year, it was just a big snow event,” she said. “Then it melted all at once, and so that’s when we started noticing that there were spots in certain areas that were coming through the tile, and then it would slowly start to leak through there.”

“When we had the roofing company up on the roof, they noticed that some of the tar paper underneath was brittle and so it was pulling away from the side of the building or the front or around the air conditioning unit,” Marley said. “So the deterioration of the material started to really take effect.”

The contractor for the project is Greener World Solutions, who replaced the roof at the American Legion and the Albert Lea Family Y.

If you would like to donate, you can mail a check to P.O. Box 313, 101 S. Broadway or visit the Art Center website to pay by credit card. The organization is also on givemn.org.