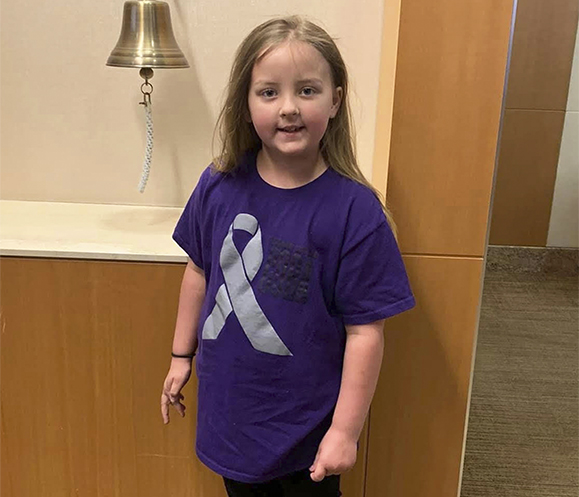 The benefit for Cora Hall will be from 11 a.m. to 3 p.m. July 23 at the Albert Lea Moose Lodge. Provided

She is also dealing with cancer.

“Back in March she had some pretty bad headaches, she got seen in the [Emergency Room]. The ER wanted her to follow up with her pediatrician, and right before they could see her pediatrician, her eye started to turn inward, which was quite alarming,” said Brittany Colvin, a family friend and Cora’s godmother, who is organizing a benefit for Cora’s family July 23.

But after Cora saw the pediatrician, that doctor wanted her to see an eye doctor. And the eye doctor admitted he could not make sense of what test results showed, so an MRI was done.

MRI results showed Cora had a softball-sized tumor on the back of her brain.

According to Colvin, doctor’s believed the tumor was an aggressive, fast-growing form.

“They were able to then remove the tumor that week,” she said.

Cora started radiation treatment on April 6 for six weeks, and once the full pathology came back chemotherapy in pill form was added.

She was supposed to have a scan done to see how the treatment was working, but the Hall family was diagnosed with COVID this week.

“Cora now has COVID on top of all of this,” she said.

So now the Hall family is waiting for an opening, and Colvin said Cora could have lasting effects on her eyesight.

And on June 11, Cora’s father, Jake, hit not one but two deer on his way to work.

“I can’t imagine any family having to deal with having a child that has cancer,” she said.

Throughout the ordeal, Crystal Hall has not been able to work.

“When Cora was getting her radiation treatment, it was daily in Rochester,” she said. “And now Cora’s been needing quite a few platelet transfusions, too.”

Colvin said following the radiation, Cora’s platelet count has not been able to stay up, and she’s had platelet transfusions.

“It’s not really feasible for Crystal to work at this time, and her husband … is not able to work all the time either.”

That means all six family members are living off one income.

Colvin, who is planning the benefit with Taylor Meaney, Krystle Hutchinson and Nikki Schmidt, said she hoped to raise $20,000 during the “fun” benefit, which will have face painting and other games.

Tickets are available at the door, but Colvin said they were working on getting pre-sale tickets. Tickets are $9 each and get you a burger basket. All food is being provided by the Moose Lodge.

You can also donate to the family’s GoFundme page, Help the Hall family during Cora’s recovery.

“Hopefully the community will rally around them just support-wise as well,” she said. “And if you see something that’s odd to the doctor, get seen,” she said. “All of Cora’s symptoms were just headaches to begin with. A lot of parents would have just brushed that off.”

Colvin also hopes by doing this to raise awareness about brain cancer. According to Colvin, the type of cancer Cora has was found in eight other cases around the world.