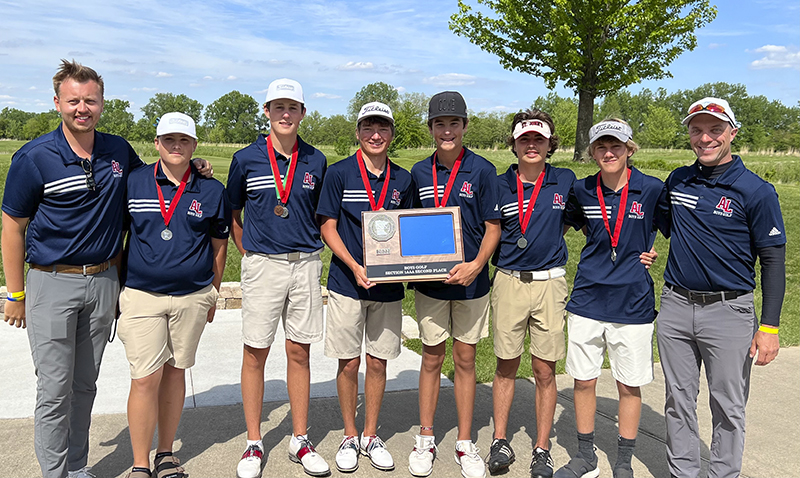 The Albert Lea boys golf team stands with their coaches after placing second this week in the Section 1AAA boys golf tournament. Provided

Junior captain Drew Teeter qualified for the tournament for a second year in a row putting up a score of 146 over the two days of the Section 1AAA boys golf tournament in Lake City.

The team finished in second place, eight strokes behind Lakeville North, and finished two strokes ahead of the Farmington Tigers, who were ranked first coming into the section meet. The Tigers used scores from Teeter (71), Tucker McKinney (73), Tim Chalmers (79) and Archie Nelson (80) to secure the second-place finish.

The team was tied for first with Lakeville coming out of the first day of the tournament out of a 12-team field, with the top six advancing to day two.

Head coach Jeff Groth and coach Harrison Koetz gave a shoutout to the entire boys golf team for their commitment and effort put in each day from the start of the season.
“These boys are a special group, and I could not be more proud of what they have accomplished,” Groth said. “From our JV to our varsity, the boys showed up ready to compete each day.”
The coaches also gave a shoutout to the lone senior, Tucker McKinney, who has played on the team since he was in eighth grade. He lost his sophomore year to COVID-19 and then was a captain both his junior and senior years. His score was used in every competitive match the Tigers had those two years.