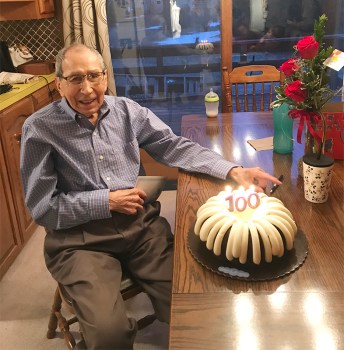 Gasca smiles with his cake earlier this month at his party with family. Provided 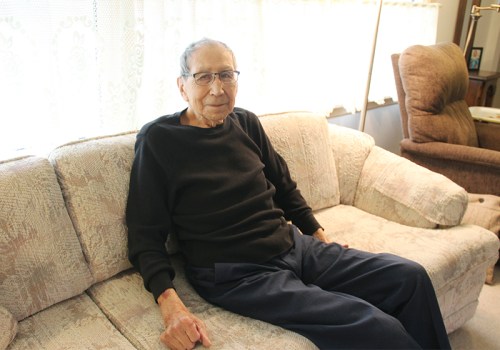 Lupe Gasca of Albert Lea turned 100 on March 12. He has lived in Albert Lea since he was 2 months old. Sarah Stultz/Albert Lea Tribune

The Albert Lea-Freeborn County Chamber of Commerce announced Tuesday it has selected Albert Lea centenarian Lupe Gasca as the grand marshal of this year’s Third of July Parade.

Gasca moved to Albert Lea when he was 2 months old with his parents and turned 100 in March. He still lives by himself, drives his own car and snow blows his own driveway.

He served in the Marine Corps during World War II and was injured in the Battle of Tarawa by what was likely a hand grenade. After recovering at a hospital in Pearl Harbor, he also served in Saipan and Tinian in 1944 and Okinawa and Nagasaki, Japan, in 1945. He received several citations as well as the Purple Heart for his service during World War II.

Upon the completion of his military service, Gasca married another Albert Lean, Judy Galvan, on Sept. 14, 1946, and together they adopted two daughters.

He graduated from Dunwoody College, where he received training in the automotive industry, owning his own shop, Bud & Lupe’s Auto Electric, with a partner for about 14 years on the corner of West Main Street and Washington Avenue. From there, he was recruited to teach in the automotive department at Albert Lea Vocational Technical Institute, which is now Riverland Community College. Through the years he has also been busy with volunteer work at St. Theodore Catholic Church, the Freeborn County Historical Museum and Myre-Big Island State Park. He previously served as a VFW post commander.

Chamber Executive Director Shari Jenson said a group of people in the community made the choice, and it seemed like a “no-brainer” after hearing about his life. She noted particularly his age, his military service and his teaching service at Riverland.

“Everybody’s talking about what an amazing man he is,” Jenson said.

The theme for this year’s parade is “Flip Flops, Fireworks and Freedom.”

The parade will start at 6 p.m. July 3, beginning at the Freeborn County Fairgrounds, traveling south down Bridge Avenue and turning west on to Fountain Street, where it ends at Central Park.