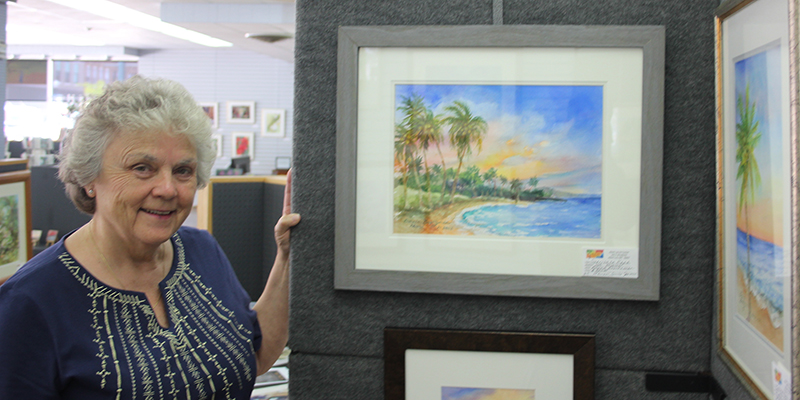 Broitzman shows off one of her paintings she did of what she thinks Flordia looked like before it was colonized. This exhibit is titled "Old Flordia". Alex Guerrero/Albert Lea Tribune

A new watercolor show featuring 38 works from Bonnie Broitzman is now up at the Albert Lea Art Center.

Broitzman, who has been an artist her entire life, called her show “Expressive-Diversity.”

“I wanted people to see that as a painter with the same set of colors, the same set of brushes, all on white paper, all the different potentials you had to paint,” Broitzman said.

Painting was something that appealed to her from a young age.

“Actually drawing and painting, especially sketching, when I was a young girl,” she said. “It was about the only time I could get adults’ attention ’cause the adults were always so busy. But they’d look at my drawings and say, ‘Oh, that’s nice, you’re good at this.’”

During her first art class at Southwest Middle School, her teacher commented on how well she drew and encouraged her to pursue a career as an art teacher.

By the time she was 20, she had a Bachelor of Arts in Art. She taught for a total of 18 years in public schools, and she also taught college classes.

“I’m very passionate about how paintings are put together, and I have a lot of art history background, so I know a lot about how other artists painted and why they painted and what they were trying to express.”

But when COVID canceled any plans she had, she decided to study.

“I was doing a lot of work on the ancient enneagram, which has nine personalities,” she said. “… They talked about these personalities as having wings, so you’re not just one thing. You’re more than one thing.”

During her work, she realized that by moving those colors to the right or left on the color wheel she would always produce a warmer or cooler color. So she started teaching classes from that perspective.

She started doing that by looking at the primary color and the color next to it on either side.

“I ended up thinking I’ll do a painting, a big painting, of every single one of these as nine colors and see what happens with the color wheel,” she said.

And that’s how part of her show came about, and she called that part of her exhibit a new perspective of looking at the color wheel.

“It’s a perfect circular system,” she said. “It’s not dualistic, and with a circular system you have a complete set of colors that will make any color in the universe.”

According to Broitzman, once an artist understands where they are in their positions to the other colors, they start to “sing” and work.

“That’s why my pictures are so bright and colorful, ’cause they’re clean,” she said.

In fact, her art palette is set up like the color wheel, and she does not even have to look at her palette to determine where a color is.

“I can keep my total focus on the watercolor paper, and I can actually paint and create an emotional response by just dipping in and the colors are right where they’re supposed to be,” she said. “I don’t have to stop and mix anything. Everything is right there, just like playing the piano. The piano player doesn’t even have to look at the keys.”

In fact, there are no drawings on the paper beforehand.

Besides those works, she’s featuring what she called “Old Florida,” which is how she interpreted the state to look before it was colonized. And that’s where the title of the exhibit came from.

She also has sets from her trips to Europe.

The show will s tay up until July 30, and most of her work is for sale. Her pieces featuring the color wheel will not be, as she plans on giving some presentations in different states. But there are reproduced works of those pieces. To purchase one, contact the Albert Lea Art Center.

“It’s going to be a traveling show,” she said.

To celebrate the show, the center will have a reception from 5-7 p.m. Friday. The event is free and open to the public.