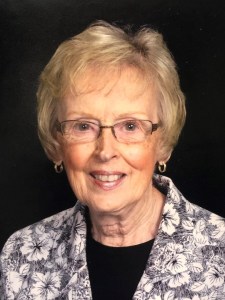 Born on Wednesday, April 6, 1938, in Shafter, California, she was a daughter of Alvert and Lois (Huenemann) Streyle and one of eight children. Dorothy graduated from Alden High School in 1956 and was united in marriage to Orville Simonsen on February 20, 1959, at First Presbyterian Church in Albert Lea. Together the pair raised three children: Mark, Jay, and Beth. Known for her organization skills, Dorothy worked as a secretary for many years and was the proud owner of the former Simonsen’s Secretarial Service for nearly 20 years. She also kept books for her husband’s business, Simonsen’s Farm Systems.

A beloved wife and dedicated mother, Dorothy was a “beacon of sunshine.” Dorothy shared her generous heart with the Albert Lea community as a devoted volunteer and board member of the Ecumenical Food Pantry, member of the National Association of Secretarial Services, executive officer of the Albert Lea Association of Realtors, volunteer and lifetime member of the Naeve Hospital Auxiliary, recognized as a 2010 outstanding senior volunteer of Freeborn County, and secretary/treasurer and director of the Albert Lea (Graceland) Cemetery Association. Dorothy found joy in spending time with her family, spontaneous day trips and trips up north, jigsaw and word search puzzles, counted cross stitch, and baking.

A memorial service will be held on Saturday, July 2, 2022, at 11:00 a.m. at the First Presbyterian Church in Albert Lea. The family will receive family and friends at a visitation one hour prior to the service. Inurnment will be at Graceland Cemetery.