FAQ: What Minnesota and neighboring states could do if Roe is overturned 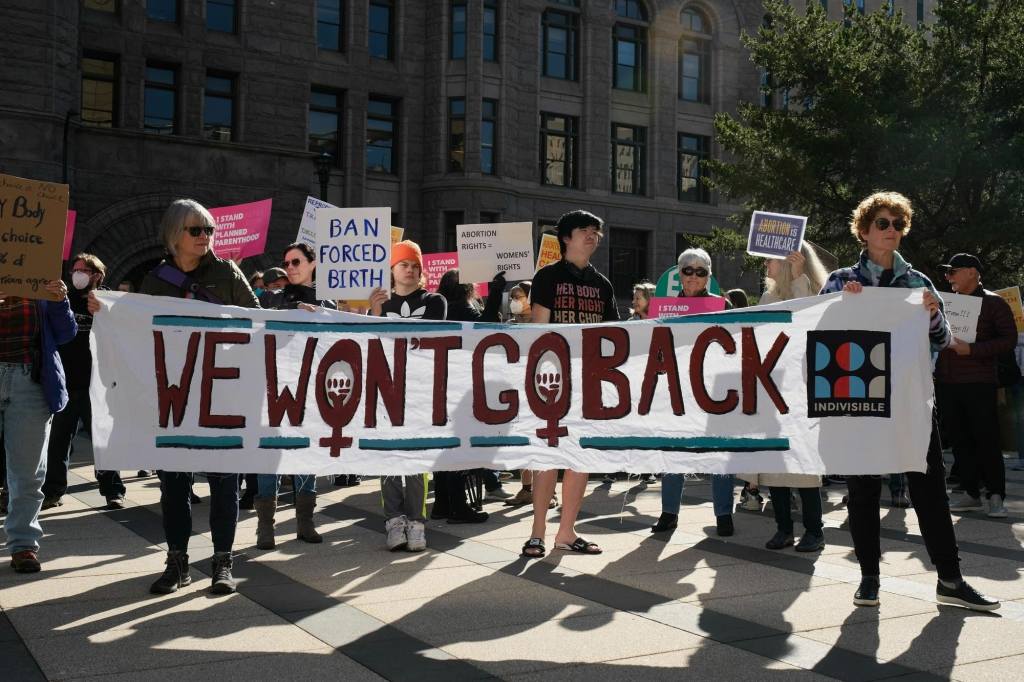 Abortion rights activists hold a sign, 'We Won't Go back' at a protest in Minnesota. Tim Evans for MPR News

This month, the U.S. Supreme Court is expected to make a decision that could impact abortion access across the country.

Since the leak of a draft opinion back in May, indicating the court would overturn Roe v. Wade — which guarantees abortion as a constitutional right – providers and advocates have said patients are sometimes unsure about what they can and can’t access right now.

Here are some common questions, and answers, about access to abortion in Minnesota and nearby states:

Is abortion legal in Minnesota?

As of now, abortion is still a constitutionally protected right nationwide. But, if the Supreme Court decides to overturn Roe v. Wade – abortion would still be legal in Minnesota.

That’s due to a 1995 state Supreme Court opinion called Doe v. Gomez, where it was determined that the procedure fell under the constitutional right to privacy.

What is a “trigger law”?

Trigger laws are ones that some states have placed on the books to go into effect as soon as Roe is overturned. Currently, 13 states have such laws, though they differ on the exact implementation mechanism.

What happens in neighboring states if Roe vs. Wade is overturned?

If Roe is overturned, Wisconsin would revert to a 1849 law, which states that “any person, other than the mother, who intentionally destroys the life of an unborn child” is guilty of a felony, except in cases where it’s necessary to save the life of the pregnant person. Penalties include up to six years in prison and a fine of up to $10,000.

Wisconsin state Attorney General Josh Kaul has questioned if the 173-year-old law is legally enforceable, and has said that he would not enforce it. But local officials could choose to do so.

On Friday, the Iowa Supreme Court reversed a 2018 decision stating that Iowans had a constitutional right to abortion. That could clear the way for state legislators to limit access in the state, though officials have not said exactly what they will do.

Planned Parenthood North Central States, which covers Iowa and Minnesota, said in a statement that it was disappointed by the decision, which “dramatically lowered the constitutional protection that Iowans have to abortion.”

South Dakota has a trigger law that would go into effect “on the date states are recognized by the United States Supreme Court to have the authority to prohibit abortion at all stages of pregnancy.” It makes providing an abortion, or giving medication to induce an abortion, a felony punishable by up to two years in prison, and/or a fine of up to $4,000.

North Dakota also has a trigger law making performing an abortion a felony, punishable by up to five years in prison and/or a fine of $10,000. However, it does not go into effect until after “the legislative council approves by motion the recommendation of the attorney general to the legislative council that it is reasonably probable that this Act would be upheld as constitutional.”

Can you still get appointments in these states?

Yes, though some places – like Planned Parenthood clinics in Wisconsin and South Dakota – have paused making new appointments after June 25 while they wait for the Supreme Court decision.

“To suspend care on the same day for patients who have traveled great distance and at great cost is inconvenient in the least; traumatizing for those who are caught by surprise after a highly anticipated appointment under difficult circumstances; and dangerous for those who are in the midst of an abortion procedure,” said Dr. Allison Linton, associate medical director at Planned Parenthood Wisconsin, in a statement.

“As a result, the PPWI medical team worked to identify a solution to mitigate anticipated service interruptions on patients.”

What are the barriers to abortion access in Minnesota?

While abortion is currently enshrined in the state constitution, there are still legal, financial and cultural barriers to accessing reproductive care.

For example, parental consent laws make it illegal for anyone under 18 to get an abortion without consent from both parents, regardless of what kind of relationship they might have with those parents.

Additionally, getting an abortion can cost hundreds of dollars, and depending on your insurance may not be covered. Minnesota also has documented inequities when it comes to health coverage and income, so these barriers often disproportionately impact Black communities, Indigenous communities, Latinx communities and other people of color in Minnesota.

Some Minnesota abortion providers say they’re already seeing an uptick in appointments, as people travel to the state from places like Texas, which has implemented strict abortion laws.

“I think people who haven’t known that has been relatively easy for them to get an abortion, they’ll feel that it’s going to be much harder now that people are going to be coming into their space trying to access abortion care,” said Shayla Walker, executive director of the Minnesota-based advocacy group Our Justice. “But I know there are a lot of people who’ve already been living in post-Roe for a long time.”

There can also be stigmas around abortion care, so people may feel like they don’t have anyone they can talk to about it in their families or in their communities.

How are providers and advocates getting ready?

Some clinics in Minnesota have said they’re working to increase the days they perform abortions, in anticipation of an influx of patients from other places in the U.S. There are also advocacy groups, like the Midwest Access Coalition and Our Justice, that provide money for abortions, as well as funding travel and hotel stays.

The group Spiral Collective helps get people rides to and from abortions, along with abortion doula support and other services.

What are anti-abortion organizations seeing?

Earlier this week, Minnesota Citizens Concerned for Life (MCCL) reported that their offices were vandalized, with several windows smashed and the words “Abortion is Liberation” spray-painted on the side. There were also recent acts of vandalism at so-called ‘crisis pregnancy centers’ in the region.

MCCL spokesperson Paul Stark said the group is putting in additional security measures in response, including security cameras. The group Jane’s Revenge has allegedly claimed responsibility for the act.

“We strongly condemn violence in any form, including against organizations that hold values that differ from ours,” said Sarah Stoesz, president and CEO of Planned Parenthood North Central States, in a statement. “Under no circumstances does violence have an acceptable place in our society, and we unequivocally reject it as a solution to our disagreements. We strongly urge those who see violence as a legitimate path forward to reconsider, and to immediately cease any further engagement of this nature.”