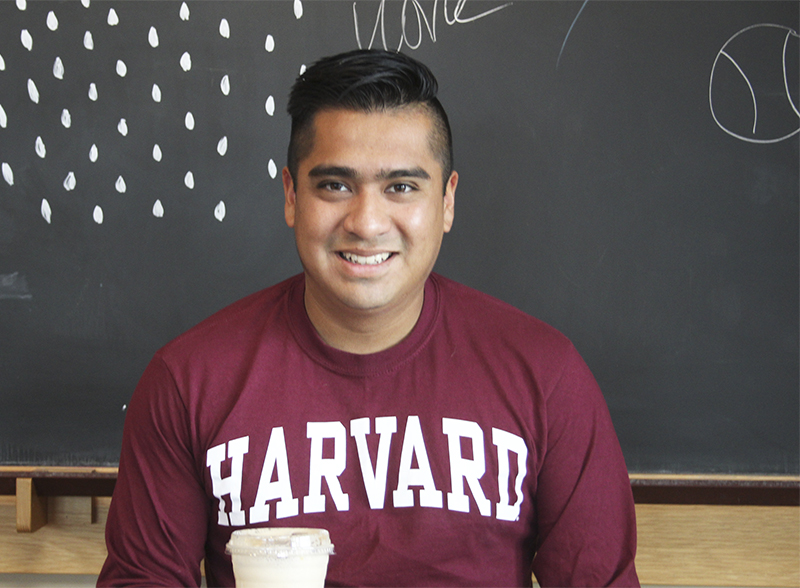 Huerta-Apanco received a Bachelor of Arts in political science from Villanova University and will attend Harvard after his year in Sušice. Alex Guerrero/Albert Lea Tribune

Anthony Huerta-Apanco is an area native who attended Shattuck-St. Mary’s School and played soccer. From there, he earned a scholarship to Villanova University, where he recently graduated earlier this year with a Bachelor of Arts in political science, but he’s already planning his next step in life: teaching.

That’s because Huerta-Apanco was awarded a Fulbright English Teaching Assistant Scholarship to teach in Sušice, which is in the Czech Republic. He will begin this fall.

“It’s intended purpose by Sen. William Fulbright was to create relationships between the United States and foreign countries abroad,” he said. “Basically what this grant does, you can either choose to do research, study or teach English abroad.”

“It’s a very rigorous application and they just want to perfect it and make you the best candidate possible,” he said.

One of the steps in the process was choosing where he wanted to apply to. Because of his familiarity with Mexico, he decided not to apply to any country in South America or Spain.

“I knew that one day I would want to go back to those places, and this is an opportunity to see a new part of the world,” he said.

He also had to submit an intent to apply for scholarship through the Villanova Career Center. From there, he began meeting regularly with faculty to review the process, the statement of grant process and develop a personal statement of purpose.

“You had to go through multiple drafts,” he said. “So last summer I was a fellow at the University of Minnesota, the Humphrey School of Public Affairs, and throughout that time I was taking graduate school level courses last summer while also trying to balance the time to work on my draft and work on the application itself, which was very tedious,” he said. “Very much kind of like applying to college, applying to grad school, which takes a lot of time.”

The deadline for application at Villanova was Aug. 25, even though the national deadline was Oct. 12.

The extra time was needed to meet with a committee composed of professors telling candidates their thoughts on the application process to polish the application.

At first glance, his two top choices of South Korea and the Czech Republic did not appear to have a lot in common.

He chose South Korea because he had a roommate in high school from Seoul and liked the idea of fully immersing himself in that culture.

He also wants to travel and felt traveling around in that area would be restrictive.

“I knew the Czech Republic was in a great spot in-between Poland, Austria, Germany,” he said.

In doing this, he wants to see how people learn and observe different ways of teaching. Huerta-Apanco was placed into a vocational and technical school.

He chose to teach because of his belief in language.

While in the Czech Republic, he wants to show people there are different versions of being American, and he hopes that by serving as a Mexican-American he can show how diverse the country is.

“Teaching English has been super important to me in my life and I recognize how important that is, and if I can help someone else learn a language in any kind of way that’s what I’ve wanted to do,” he said.

He also sees the opportunity as a way to help prepare him for another future goal: creating educational policy.

“That’s something super-important if we want to get to educational policy, if you want to get to any type of leadership or administration position,” he said. “I feel like a lot of — at least people today in my experience through different settings in the private and public institutions of education — that the people at the top have never really seen what it’s like with students at the bottom and for what it’s like for teachers to observe and watch teacher’s teach.”

While there, he wants to engage students in sports, which he called “universal.”

Because Qatar is only one hour ahead of the Czech Republic, he plans to watch World Cup games live and cheer on both the U.S. and Mexico, and he hopes he’ll be able to engage his students, whom he described as “athletically focused,” that way, and said soccer was a big sport in where he will be.

Sušice is about three hours away from Munich, Germany, and less than four hours from Vienna, Austria.

Excluding Mexico, the Czech Republic will be the first county he has visited. The Fulbright grant is for 10 months, and he will be in Sušice from August to June 2023.

According to Huerta-Apanco, students there choose their careers earlier and attend designated schools. He also felt confident in the geo-political climate in the area.

“I’m kind of at peace with that and they’re very good at taking care of Fulbrighters, especially if there’s a U.S. embassy in the country,” he said. “If anything, we’d be pulled out.”

Huerta-Apanco deferred his acceptance to Harvard for a year, where his goal is to earn a master’s in educational leadership, organization and entrepreneurship. He wants to focus on educational policy.

“Rewriting legislation and laws and whatnot to help allocate more resources to different communities and public schools in general,” he said.

He said one of the mottos of the program is “learn to change the world.”

“I think that speaks volumes in the sense I will be in a different part of the world living with people that are completely different from what I’m used to in terms of culture,” he said.

He said that coming from Albert Lea, he said he was thankful to the institutions he went to to get where he is.

“I’ve never thought of myself as above anything, so I think it’s very important to remember where you come from [while] also acknowledging that a place like Albert Lea needs the support, which is why I’m getting into education in the first place,” he said. “… There were resources that I did not have for myself here which I found in other places, and I want to be able to support students who come from similar backgrounds as myself that may be in this kind of struggling period not knowing what they want to do or not knowing who to ask or where to go to.”