Yesterday I watched a group of people just like you or me, take away a constitutional right from biological females in the U.S. 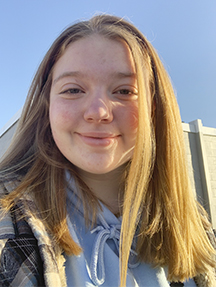 I was on a plane when the news hit. I put CNN on the plane TV just trying to see what’s going on in the world, and imagine my horror when I opened CNN and saw the words “Supreme Court overrules Roe V. Wade.”

I didn’t think it was real. I thought it was just the theory, but I needed to know for sure, so I stole my brother’s headphones and sat there as I listened to the host read quotes of the different justices, and it all became real.

I have the privilege of living in a blue state with a Democratic governor who plans to keep abortions legal, but I know there are lots of others who cannot say the same.

The thing that also comes into my head is that even though right now I am privileged enough to have that right still, I am not naive enough to say I’ll have it forever. I live in a state that’s blue for now and has a Democratic governor for now.

I want to say I’m surprised by the overruling, that I was blindsided, but that would be a lie. It was an ugly truth that this would happen. We all knew it was coming but wanted so much to be wrong.

This overruling may seem like a small thing but it is the start of something bad. Changing something of this magnitude opens the door for others to be changed as well, such as the right to contraceptives and the rights of gay marriage.

We are moving backward, not back to the “good old days,” but to the days where women couldn’t vote and people couldn’t love who they love without being jailed.

I think the saddest part is that I will have less rights than my grandmother did at my age, and my rights are valued less than guns.

I am sick of having to sit here and watch as the world strips me of my rights and getting told to get over it because I’m too young to vote. I also get to see the posts of “life wins,” which is the most uneducated bullcrap I’ve ever heard. Making abortions illegal doesn’t get rid of them — it gets rid of safe abortions. So now we cry, scream or even break something, but we will get back up and fight for our rights.

Marissa Hanson is an Albert Lea High School student and an intern at the Albert Lea Tribune this summer.