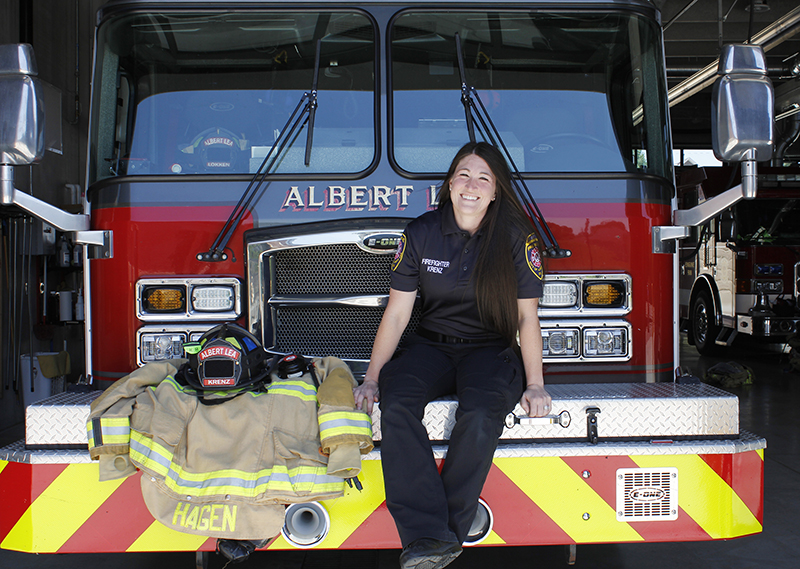 Krenz started as a part-time firefighter back in 2018 when her husband was talking with one of the fire captains at the gym about how they need more firefighters.

Krenz said she was curious and asked how she needed to change her workouts to try out and what she would need to do. He told her “just apply,” but Krenz was still unsure.

Krenz didn’t always plan to be a firefighter.

“There are people who dream of being a firefighter their whole lives … for me if you ask my dad, out of a million careers he could pick in my life this would still not be on that list,” Krenz said.

She was so nervous when she dropped off her application she dropped it off at the bill pay box instead of the office at City Hall. She then passed the physical fitness test and was offered a job. Part time seemed like what she was gonna stick with until October of 2021 came, and the department made a list of people who were trying out to be full-time firefighters.

Krenz wasn’t sure what she wanted to do.

“I don’t really know what way I want to go in life with anything,” Krenz said, but she still tried out and made the list.

“In January, they were looking to fill a spot with somebody, and they put me there,” she said.

She talked of how none of this feels real and that it all “feels like a dream,” as well as “it’s very surreal being here.”

“I feel like I worked hard to get here, but at the same time I’m like ‘No that’s not a real thing.’”

As part of being a full-time firefighter, she works 24 hours three times a week. The firefighters sleep at the station on those nights. At the fire department they don’t have janitors, so they take care of themselves and the building all on their own.

“I was very scared of change — I’m a planner,” she said. “I like to have everything my way, but I think the different day-to-day things we do make the days go so fast,” Krenz said. “We do so many things, 24 hours seems like a lot, but it just goes by so fast.”

At the fire department, the firefighters have a lot of different skills and interests among them, which all come into play one way or another.

“I majored in psychology and photojournalism,” Krenz said. “And you never think any of that is going to come into play but the cool thing about being in this department … is when you bring all of those different specialities in one building, we’re a powerhouse together and that it does.” Krenz said she helps with the department’s social media, headshots of the firefighters and the retiree wall.

“One of my favorite parts is that everybody’s interests have a place here,” she said. “One of our guys likes to make stuff, so our shower rugs upstairs are old fire hoses he weaved together,” Krenz said.

“You hear about the brotherhood in a fire station, but you really do get to know those people and have to learn to live with them for 24 hours,” she said. “We get to know each other’s wives and children. We’re all like aunts and uncles, it’s really special.”

The training isn’t the only thing she learns,

“I also learn life skills, there are a lot of things where it’s nice to be independent, because now I have a lot more in my tool box,” Krenz said.

From running tools, checking oil in vehicles and knowing how to run small engines such as the snow blower — these are all skills she has learned and have helped her live even more independently than before.

Krenz talked about how with training she doesn’t always know what she doesn’t know until she’s learning it and how there is always something new to learn.

The fellow firefighters are mostly who train her on the smaller more day-to-day things, and she talked of how willing they are to help.

“If you’re willing to learn and put in the work, someone is willing to teach you,” she said.

One of the things Krenz said she had taken away from being a firefighter is the mindset.

“I’ve always been one to keep driving and keep pushing, but here when you start to reach your breaking point you still have to take 10 more steps.”

Krenz talked of how she has to learn how to do things a little differently because of how her build is different. But she said the other firefighters have been nothing other than welcoming.

“They welcomed me with open arms,” Krenz said. “I sometimes forget I’m not the same as them.”

Being a firefighter has also brought her and her husband together.

“My husband is a part-time firefighter here,” Krenz said. “We’re on different shifts, but we get to share in on the excitement of calls. Not every couple gets that special understanding of what we’re doing.”

Being a firefighter might not have always been the plan, but she has found her place.

“I’ve always been a tomboy, so as much as this position surprised my family and myself it’s fitting also,” Krenz said. “I didn’t ever imagine it, but I’m glad I’m here. I think I finally found home.”