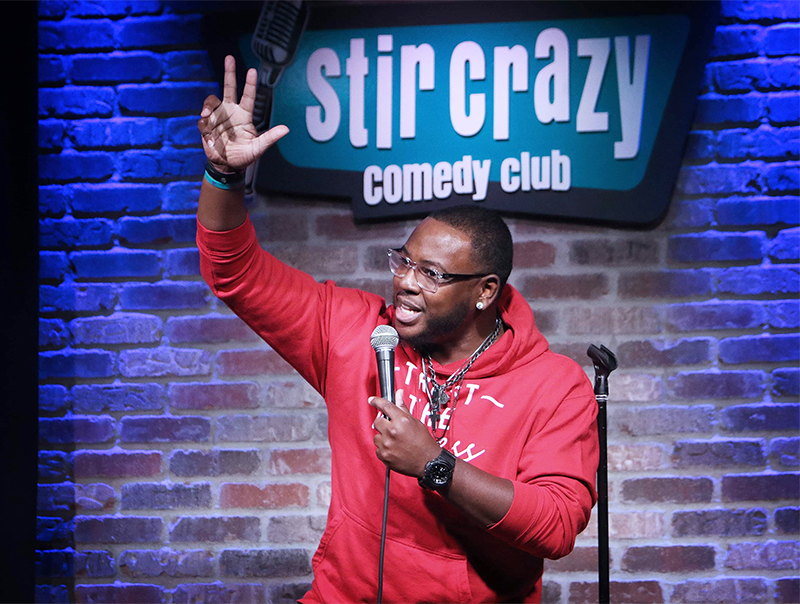 Lake Mills-based comedian Day Peace recently released a new album, "Peace of Mind (Side B)," which went No. 1 on both Amazon and iTunes. Provided

Project tops the charts on Amazon and iTunes

Lake Mills-based comedian Day Peace has been in the business for 11 years.

“For me it comes down to joy,” he said. “I love the concept of doing something that I love and bringing joy to people.”

For him, laughter was an integral piece of everyday life.

“I remember when I put it out, I listened to it and I was like, ‘eh,’ and it took me a whole year before I re-listened to the album,” he said. “Now I love the first album.”

After two years, he started to think about what he would have done differently with that album. And that, to him, is what Side B is — a redo of the first album.

He described the new album, which includes jokes he messed up on or missed on the first album, as being more free. For him, it’s also more vulnerable.

“The first album was a collection of jokes that I had been telling for nine years,” he said. “This album was like, ‘what more do I want to say, especially after the last two years that we’ve had.’”

And he wanted to talk about subjects such as Bill Cosby being at home. He also wanted to discuss his children — Drake, Kyrie and Kobe.

“I wanted to share kind of my thoughts on some of these things that had happened,” he said.

He also wanted time to interact with the audience, and that is what the album is.

In his first show, performed at Teehee’s Comedy Club in Des Moines, he tells jokes, shares stories and talks about how he dealt with being hurt.

“I once spray-painted my ex-girlfriend’s car, which I’m not proud of, OK,” he said.

During the second show, also at Teehee’s, he put more emphasis on crowd interactions.

Peace said there were a number of messages on the new album.

“One of the main messages would be putting myself out there,” he said.

He described the album as being honest, and said he shared stories he had not really shared publicly.

“That’s what I love about comedy,” he said. “I’ve discovered so much about myself through making people laugh, and I think one of the messages for me was it’s OK to put yourself out there, it’s OK to have these types of conversations.”

During one of his shows, he interacted with a transgender woman.

“She’s just sitting in the crowd, and she has this rainbow spaghetti-strap leotard, I don’t know what it is,” he said. “She’s wearing it, and I’m like, ‘the confidence that you have to wear that,’ … I applaud her and I had her come on stage and kind of share her story, and it was such a beautiful, pure moment.”

And that’s what he sees the album as — beautiful, pure moments.

“It was probably my most vulnerable work that I’ve been able to share,” he said.

Walking into the recordings, he knew what jokes he wanted to share and what subjects he wanted to touch on, but he said after seeing how well the first half of the show went he decided to make the second part where he “went completely off the rails.”

“I walked into it like, even if I don’t keep anything from the second show, the first show was well enough,” he said. “It gave me the freedom to just have fun the second show.”

Both shows were recorded with one take, and he said he would accept it if he made a mistake.

His favorite track on the album was when he described spray-painting his ex-girlfriend’s car.

“I knew I was going to do it, but I didn’t know the [words] that I was going to use yet,” he said. “Which is not standard. You’re supposed to write everything out.

“And it was just a moment, because at the end it was a pure moment of talking about how men need to do a better job of conveying hurt to boys, cause I think that’s a conversation that’s not being had enough.”

And that was one of the messages in the album: Things aren’t as black and white as we may have been told.

He also talks about family values, among a number of different messages.

“I talk about my mother being afraid of the police cause the sheriff got behind us,” he said. “Followed us for a mile or two.”

To produce the album — a project that took two weeks — he hired a film crew to record his shows in late March. He then took the audio and enhanced it with the help of a computer program.

“Peace of Mind (Side B)” went No. 1 on both Amazon and iTunes, a fact that surprised Peace.

Peace said he had a month to do pre-orders and make people aware of what was coming.

“It went No. 1 early on new release because people were pre-ordering and supporting,” he said. “Then it went No. 1 on best seller, which is … a huge deal.”

The album went No. 1 the night it was released, beating out comedians such as Louis C.K.

“That moment was like ‘Wow, this is huge,’” he said. “Absolutely I was surprised.”

Recently he performed at an after-prom and for teachers at Lake Mills Community School district. He has been selected emcee at Ragbrai, an annual bicycle ride across Iowa, where he’s expecting a crowd of 15,000.

On Sept. 3 he will both perform and produce a show at Diamond Jo Casino.

“That’s scary because when you produce a show you’re responsible for every aspect of it, and it solely depends on ticket sales,” he said.

Peace said for his first album he did not use pre-sales or put the album on streaming platforms until months after the album’s release.

“Peace of Mind (Side B)” is available on Amazon, iTunes and Bandcamp. It’s also streaming.

“If you just stream your music on Spotify or TIDAL or anywhere else, it’s now streaming everywhere,” he said.