Lorene J. Ingvalson, age 97, of Austin, Minnesota, formerly of Blooming Prairie, Minnesota, passed away Sunday, June 5, 2022, at Sacred Heart Care Center in Austin. Lorene Janet Hagen was born in Elkton, Minnesota, to Oliver and Clara (Studer) Hagen on July 7, 1924. She graduated from Elkton High School in 1942. Following graduation, Lorene worked at Hormel in Austin for a few years, then Woolworths until 1948. On November 13, 1948, Lorene was united in marriage to Clayton Ingvalson at the First Lutheran Church in Blooming Prairie. The couple farmed together, and two daughters, Sandra and Laurie completed their family. When her girls were older, Lorene used her talent as a seamstress for Harriet’s Dres-Wel in Blooming Prairie for 30 years. She loved to sew and do embroidery; she sewed bed caddies for the residents of Prairie Manor Care Center in Blooming Prairie. Lorene was involved in many church activities for the First Lutheran Church in Blooming Prairie. She chaired the annual lutefisk dinner for over 10 years and served as a Chairman of WELCA for two terms. Lorene was also a Circle Chair for many years and spent countless hours volunteering in the kitchen. She was a member of Farmers Union and served as Mower County Chairman. A highlight of Clayton and Lorene’s married life was a trip to Alaska in 1997. In 1998, the couple moved to Austin, Minnesota, where they stayed the rest of their years. During her time in Austin, Lorene donated her time and resources to make over 1,500 teddy bears for Worlein Funeral Home. 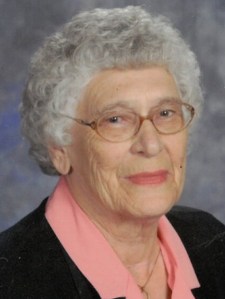