A Coon Rapids man is facing charges after he allegedly showed a handgun during a traffic dispute on Interstate 35 last week in Freeborn County. 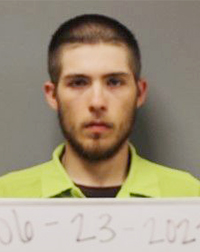 Antonyo Robert Ausman, 18, was charged on Friday with one count of second-degree assault with a dangerous weapon and one count of possessing a firearm without a serial number.

The court complaint states Minnesota State Patrol troopers responded to an incident on Thursday on I-35 near milepost 34 involving Ausman pointing a gun at another driver.

The victim told troopers he was traveling northbound when he was cut off by the vehicle Ausman was riding in. The victim tried to pass the vehicle when he was reportedly flipped off by Ausman, who was the passenger in the car. The victim stated he flipped Ausman off in return, and at one point he saw Ausman reach into a bag in the backseat and retrieve a black handgun.

The victim stated Ausman allegedly held the gun up to the window but did not directly point it at him.

He called 911 after the incident.

The gun was marked Polymer80 on the side and did not have any serial numbers. Next to the firearm were two 24-round Glock magazines loaded with 33 rounds.

Ausman reportedly later admitted he had lied about the gun not being in the vehicle and admitted that he held the firearm up to the window and pointed it at the ground in the victim’s direction.

He claimed he did so in self-defense.