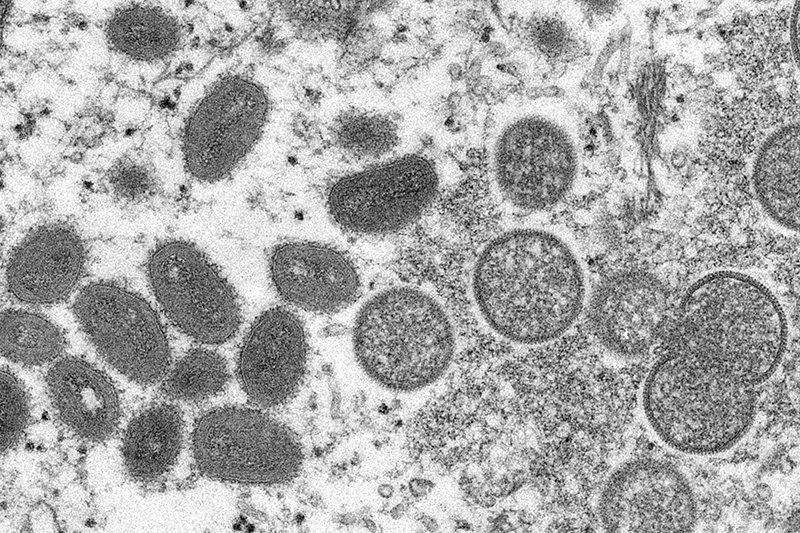 This 2003 electron microscope image made available by the Centers for Disease Control and Prevention shows mature, oval-shaped monkeypox virions, left, and spherical immature virions, right, obtained from a sample of human skin associated with the 2003 prairie dog outbreak. The Biden administration has started shipping testing kits for monkeypox to commercial laboratories, in a bid to speed diagnostic tests for suspected infections for the virus that has already infected at least 142 people in the U.S.(Cynthia S. Goldsmith, Russell Regner/CDC via AP, file)

On Monday, the Minnesota Department of Health announced the state’s first confirmed case of monkeypox. According to the Mayo Clinic, monkeypox is a disease that can affect humans for two to four weeks with symptoms including fever, rash, headache, muscle and back aches, chills, tiredness and swollen lymph nodes.

Monkeypox is transmitted through prolonged direct contact with someone or through blood and body fluids. It can also be spread through contaminated items such as clothing, bed sheets, towels, dishes or utensils. It can also be transmitted by animals through scratches and bites, but according to Richard Kennedy, co-director to the Mayo Clinic Vaccine Research Group, that type of transmission is usually found in western or central Africa where animals have the virus.

”Once you’re exposed and get infected there’s an incubation period,” Kennedy said. “It can be anywhere from about two days to 17 to 21 days. But for most people it’s about two weeks.”

According to Kennedy, during that time anyone infected will not show symptoms, and then once they start they are nonspecific and include two to three days of a fever, headache, muscle ache or swollen lymph nodes.

“And then the rash starts,” he said. “The rash doesn’t always start in everybody, and the severity of the rash can differ, and vary widely.”

The monkeypox rash is also what differentiates it from chickenpox, and he said a monkeypox rash would start on an individual’s face and move toward the arms, with all the blisters “at the same level of development.”

Chickenpox, on the other hand, is located on the torso, and the rash, puffs and blisters will be on the same part of the body but can be delayed elsewhere.

“It’s really the distribution of the rash, and how long it lasts,” he said.

It is also possible to be asymptomatic, and he said those people would have less virus in them and were therefore less of a transmission risk.

Kennedy said the accompanying blisters look like small pimples or blisters and are flat before hardening into round bumps, fill with liquid and turn into scabs that fall off and often leave scars. The whole process takes three to four weeks.

“You are infectious from about the time you show symptoms — start showing symptoms — till the blisters and scabs fall off and heal up,” he said.

People most at-risk include those traveling from western or central African countries and those who interacted with infected animals.

“The outbreak back in 2003 was due to people handling rodents that had been brought over from Africa,” he said. “They were placed next to some prairie dogs, and then the prairie dogs got infected and everybody that developed a case here in the Midwest had been handling those prairie dogs.”

He said the rise in international travel was a common underlying factor in the spread of monkeypox.

But the new outbreak is being found largely in the gay and bisexual community, and Kennedy suspected it was driven by recent pride events or parties, activities he called super-spreader events that could jumpstart a spread.

“A lot of people were getting together, engaging in activities that were conducive to spreading the virus,” he said. “Those people go home and interact with their contacts, their family members, households or coworkers. And then there has been human-to-human spread from there.”

Kennedy said because monkeypox was a DNA virus, it was more stable than something like COVID-19, and therefore mutated into different variations slower.

He said it was easier to get COVID than monkeypox, mask-wearing was not necessary everywhere and that wide-scale daily life changes were not needed for 99% of people.

“The strain that’s causing all the mutations now and most of the cases now, it has changed, it has mutated a little bit from a strain that came out of Africa,” he said. “That strain was associated with less than 1% mortality rate.”

He said even that less than 1% was an overestimate, and no one outside of Africa has died during the current monkeypox pandemic.

If you or someone you know is showing symptoms, Kennedy said to contact health authorities or visit their health care provider. Tests are available for monkeypox. If you test positive, he said you would likely be isolated at a hospital or home. That isolation would last for several weeks.

Kennedy admitted it would be hard to get people to isolate for three or more weeks, and that many people with the illness did not need to be hospitalized.

Currently there are two vaccines for monkeypox: the ACAM2000 smallpox vaccine, which Kennedy said was 85% effective, and the JYNNEOS vaccine. He described the later vaccine as safer and having few side-effects, but that it was also a two-dose treatment. He said intimate contact was much more likely to spread monkeypox than talking to someone.

Kennedy said the U.S. has stockpiled about 100 million doses of the ACAM2000 vaccine and had a “few thousand doses” of the JYNNEOS vaccine. Don’t expect to see vaccine clinics rolled out for wide-spread use, at least not immediately.

“The CDC has been reviewing this constantly, and right now they don’t think that the outbreak here in the U.S. is at the point where they need to release vaccine, wide-spread vaccine,” he said. “What they’re trying to do now in a variety of places is what’s called the ring vaccination approach.”

Kennedy said currently the number of people needing testing was “well below” the limits for the state health department.

He recommended those displaying symptoms of the disease to get checked out and limit interactions with anyone else showing symptoms.

Kennedy said currently the risk of contracting monkeypox within the state was low, and said the person who had it had traveled.

“I would say for most of the people in Minnesota, right now the risk is still really low,” he said.

As of last Friday, Kennedy said there were “about 4,000 cases in almost 50 countries.”

At the same time, he said calling it a pandemic did not mean it was time to panic, just that monkeypox was spread around the world and continues to grow.