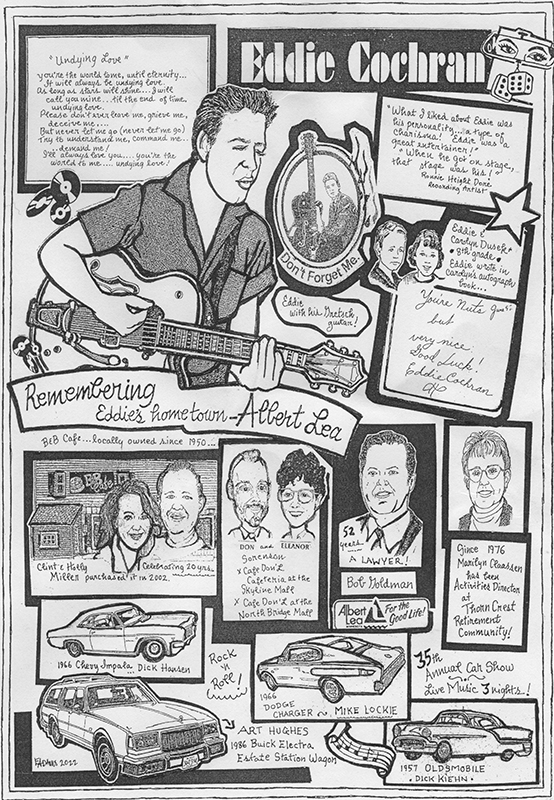 The museum is proud to be the hometown of Eddie Cochran. He was born Oct. 3, 1938, at Naeve Hospital in Albert Lea.

Shown is Cochran with his Gretsch guitar and the lyrics to “Undying Love,” one of the songs he sang. There is a quote from recording artist, Ronnie Height Dore, “that when Eddie stepped on stage, that stage was his!”

Also pictured are Cochran and Carolyn Dusek in eighth grade and what he wrote in her autograph book.

There also is some history of Cochran’s hometown:

The B&B Cafe, locally owned since 1950 when it opened. Clint and Holly Miller purchased the cafe in 2002, and this year are celebrating 20 years of ownership. It is a breakfast restaurant, with what many describe as exceptional pancakes and french toast. They employ 15 people and get up and start making everything from scratch at 3:30 a.m. each morning.

Don and Eleanor Sorenson are depicted. They first operated the Cafe Don’L restaurant.

Featured, too, is Bob Goldman, an Albert Lea High School graduate who became a lawyer practicing in Albert Lea for 52 years.

Marilyn Claassen, also an Albert Lea graduate, has been activities director at Thorne Crest Senior Living Community since 1976. So many area classic car owners look forward to the car show that Thorne Crest has every May.

Lower on the print are four classic cars that are part of the Eddie Cochran car show in downtown Albert Lea.

The prints will be available at the Adams’ Originals Shop in downtown Albert Lea starting at the event. Some prints are black and white and some are hand-painted.

All prints are numbered and signed.