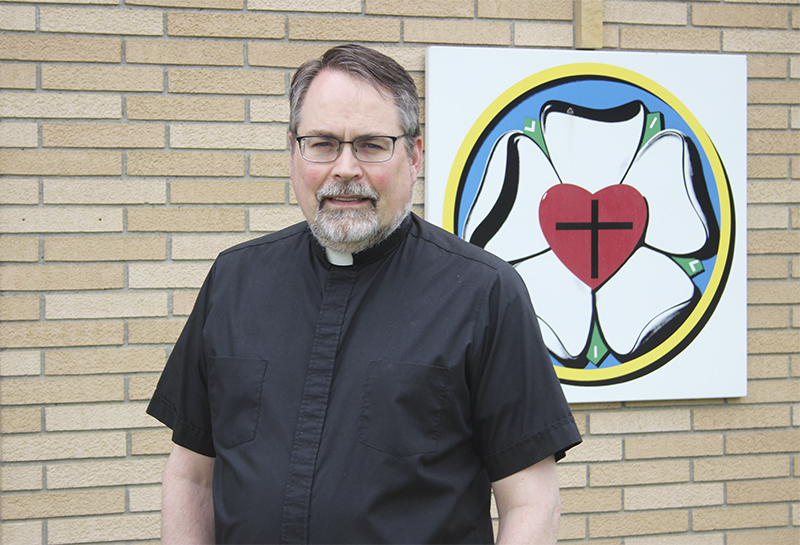 Prior to taking the call in Hartland, Phillip Lepak served in Arizona. Alex Guerrero/Albert Lea Tribune

Phillip Lepak, pastor at Hartland and Manchester Evangelical Lutheran churches since earlier this year, started his life as a scientist.

“My undergraduate work was in science, and I was not a Christian at the time that I went to college,” he said. “Heard about Christ from my roommate and some of his friends, and as I learned more about it, I found myself believing what the Bible said, thought that would be a good thing to share with other people.”

And he’s been doing that ever since, 1999 to be specific.

At the end of his studies, Christ Lutheran in Port St. Lucie, Florida, asked if he would serve as pastor.

Lepak attended Michigan Technological University, Northwestern College in Iowa, Bethany Lutheran Theological Seminary in Mankato and completed his master’s in divinity — where he received a call — in Florida. He taught at Bethany Lutheran as a professor of religion and physics.

He has also served in Illinois, Indiana, taught at Bethany Lutheran and worked in Arizona.

“The culture is very different from the culture in Arizona from where I was serving,” he said. “There, almost no one is related because they’ve all moved here and they don’t have their children with them. They don’t have close connections with people there.”

Though he’s only been in Hartland for a few months, he said nearly everyone in the area was connected through extended familial connections within the area.

His goal as pastor is to “share the good news” that he received.

“To me, that’s the most important thing for the congregation,” he said. “God doesn’t promise that a congregation will grow and he certainly doesn’t say that it will shrink as a result of sharing the word of God, but focuses us more on just the activity of sharing the good news that we’ve received and letting him do the work of growing the church or whatever his decision is about the church. We trust that he knows exactly the best thing to do.”

Lepak admitted he has not been in the area long enough to know if there were any changes that he would like to make, and said he planned to spend the first year observing and learning what was important to members of the congregation.

“There are a lot of questions I don’t even know to ask yet about how things work and how things are interconnected between the two churches and even within the church,” he said.

And Lepak has used his science background to help him.

“In 2015 I started going back to take some more graduate classes in physics at Minnesota State in Mankato,” he said. “Was connected with a professor there that worked as a research assistant for him.”

He works with the Marvin M. Schwan Charitable Foundation to build electronic devices that help older people connect with their churches online and through their televisions. He also enjoys gardening, and said he and his wife were in the process of tearing up the yard and putting in flower beds and a garden, something he could not do in Arizona with the rocky soil and heat. Most of his children and grandchildren live in the Twin Cities.

He was born and raised in Valparaiso, Indiana, northern Wisconsin, West Germany and the upper peninsula of Michigan.