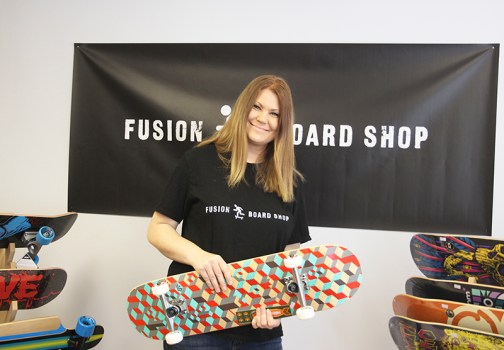 Jessica Craig, owner of Fusion Board Shop, grew up in a skating culture and always thought about owning a board shop. Alex Guerrero/Albert Lea Tribune 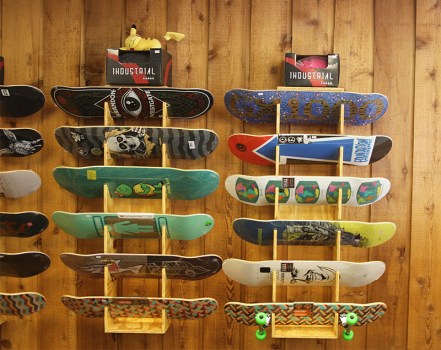 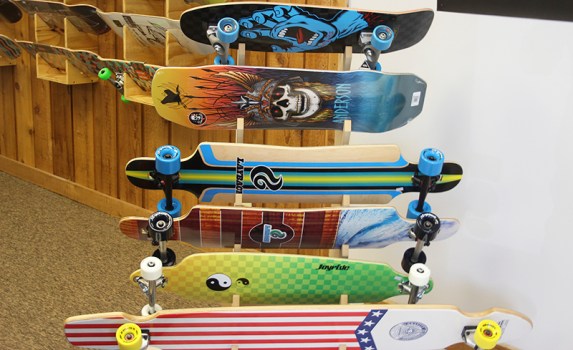 According to Craig, before opening a skating shop here the closest thing to a shop dedicated to skating is Zumiez, with stores in Mankato and Rochester. Alex Guerrero/Albert Lea Tribune 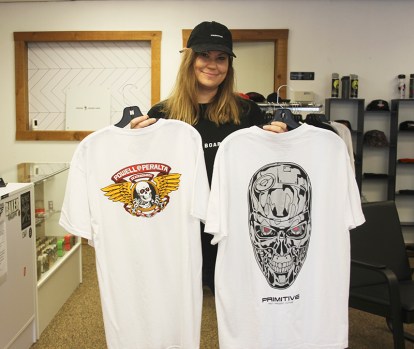 Craig holds up two of the t-shirts available at her store, Fusion Board Shop. Alex Guerrero/Albert Lea Tribune 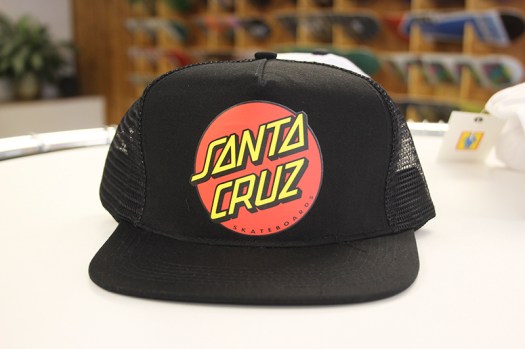 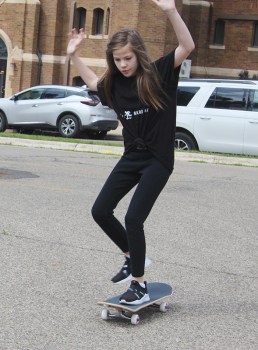 As a child, you’re constantly told to follow your dreams. So that is exactly what Jessica Craig did.

“My early years were in south Minneapolis, and I had a big group of friends, and every weekend we would skate down to Uptown and visit Cal Surf and other prominent skate shops that are regionally famous,” she said.

So she spent hours visiting when she could, and said her summers were filled with skating, spending time outside and having fun.

“Some of my best memories growing up were skating with friends, and so I just wanted to provide a space for people that are into the board sports.”

Now she is the owner of Fusion Board Shop, a skateboard shop at 220 W. Clark St. in Albert Lea, which had its grand opening last week.

Craig had wanted to own a business for five years, and said she was finally in a position to do so.

And by opening Fusion, she hopes to re-create that skateboarding experience.

“We really reach the southern Minnesota region,” she said. “A few people have come in and said that they’re grateful to have the shop here, cause otherwise they’re traveling an hour to Rochester or a little ways to Mankato.”

Craig said she always saw skaters — whether on longboards or skateboards — around the lake, and came to the conclusion there was not a place for those people to pick up spare parts.

While at Fusion, she encourages shoppers to “talk shop.”

“We can build boards for them, or they can build their own boards.” she said.

This is her first foray into skateboard building, and said her motivation for opening was to create more diversity in shopping, and she said Fusion was one of only “a handful” of female-owned skateboard shops across the country.

“Skateboard building really isn’t that difficult,” she said. “There’s a lot of tutorials, even on YouTube that anyone, if you’ve got the supplies, anyone can build a skateboard.”

To prove that point, she noted her daughter Cailyn helped her to build.

“It really just takes key components and some know-how and you can build them pretty easily,” she said.

Despite the short time being in operation, she said she had a customer who had not skated in a decade. But after being set up with new grip tape, new bearings, new wheels and new trucks, “he was excited to get his board back in shape.”

She also noted that while other area stores sold skateboards, she did not know if they allowed customers to build their own boards, and said the closest store dedicated to skateboarding was Zumiez, with the closest stores being in Mankato and Rochester.

“We can build the boards for free, no additional cost,” she said. “If someone is interested in coming in and buying all the components, we can assemble them for you.”

Fusion Board Shop will also help customers find products that they themselves would assemble that are the best fit.

Craig said Fusion was the only “dedicated” board shop in the area.

“We’ve had a lot of support, both online and in the store,” she said.

Fusion Board Shop is open from 11 a.m. to 5 p.m. Tuesdays to Saturdays, but said hours could change when the school year starts up again. Its website is www.fusionboardshop.com.

She said shoes would be added in the near future and said clothing options will be expanded.

“Even if you don’t buy, just come on in and chat with us, get to know us,” she said. “We really want to be a part of the community.”