A Freeborn County Sheriff’s Office detective running for sheriff said he has a wealth of experience he could bring to the position if elected, along with established relationships on the local, state and national levels. 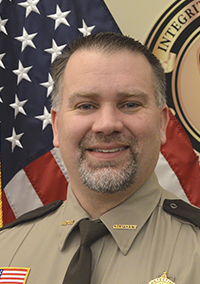 Ryan Shea, who has worked for the Sheriff’s Office since 2000, said he thinks the department needs — and the county deserves — to have the most qualified person in office.

“I just think I would be the most qualified candidate,” Shea said.

In 2011, he was promoted to patrol sergeant and at the end of 2014 became a detective, where he has worked ever since.

While a patrol sergeant, he took supervisory classes, including through the Bureau of Criminal Apprehension in supervision and management, and has taken numerous investigative classes as a detective.

Shea said he is one of the firearms instructors for the Sheriff’s Office, and from 2015 to 2021 he also worked as a medicolegal death scene investigator for the medical examiner’s office.

He started the county’s drone program in 2017 and is currently the only drone operator. Using his knowledge, he has also put together statewide training for other departments on drone operation, which he said has been beneficial in cases of fugitives, missing people and response to high-risk crimes.

Shea, who lives south of Albert Lea, said he has worked under four sheriffs.

“I can draw from my experience of working with all of them,” he said, noting he has worked with Don Nolander, Mark Harig, Bob Kindler and Kurt Freitag, and would draw on the good from each leader.

He said he would continue with the positive things happening in the department, including increased training and equipment. In addition to sending employees to new training, he would like to implement more practice for the current training they have and get employees together more often to train as a department, which he said will help build camaraderie among the staff.

He said he would work with the Human Resources department and commissioners to fill open positions — presently the department is short three employees. He said nationwide it is hard to hire people into law enforcement.

In addition to his involvement with the department, Shea is a part of several community efforts.

He said he started getting involved in the community when he was 16 when he coached his first youth baseball team, something he continued to do over the years before the COVID-19 pandemic.

He and his wife, Jolean, have been married for 19 years and have two children, a daughter who is a teacher at Hollandale Christian School and a son who is a senior at Albert Lea High School.

Shea has also been a trap team coach for Albert Lea High School the last four years, is the adviser for the Albert Lea Youth Archery Club and has been involved with football and dance boosters, Relay for Life, the Full Draw Archery Club and numerous roles with New Life Christian Church, where he presently is an elder and financial officer for the church.

“I’m a very involved person … but with that I’ve developed good personal and professional working relationships with people,” Shea said.

Shea said he plans to be at the Alden parade June 18 and is working on scheduling some meet and greets in the community. People can find out more about his campaign on Facebook under “Ryan Shea for Sheriff.”