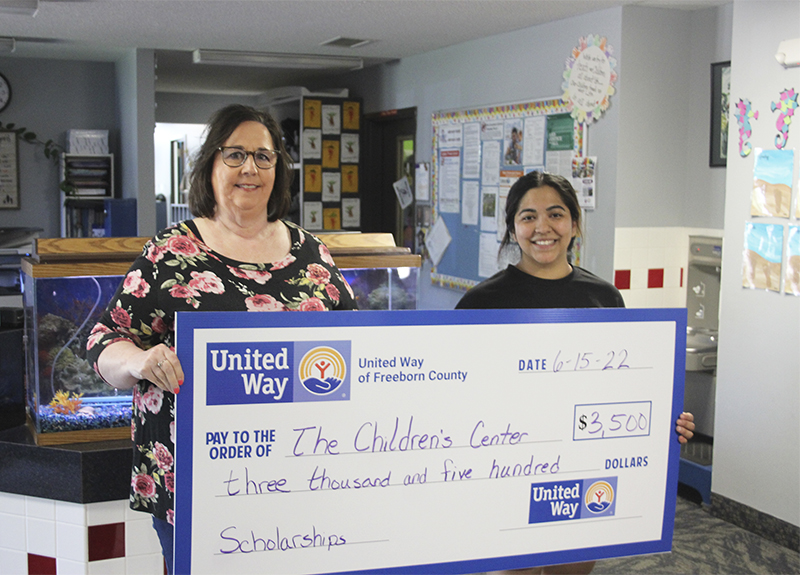 Brenda Reed, co-executive director of the Children's Center, and Jasmine Losolla, a teacher at the center, hold up a check for an additional $3,500, which was on top of the $10,000 the organization originally requested. Alex Guerrero/Albert Lea Tribune

After awarding $93,000 to various organizations, the United Way of Freeborn County still had $7,000 left over from its initial goal of committing $100,000 to area nonprofit organizations as part of its Community Impact Grants.

“Whenever we have funds that are left over, which is pretty rare cause usually our grant requests come in exceeding what we have available to give, … whenever there is a decision with surplus funds  — whether it comes in through grants or other sources or special care — it always goes back to the board of directors,” said Erin Haag, executive director of the United Way of Freeborn County.

“COVID has brought forth new programs that are now applying for funding that have never applied for funding before,” she said. “Some of them are new.”

She also noted some of the larger, more established programs chose not to apply for various reasons.

According to Haag, one of their 11 board members started talking about what the need for child care was like in the community.

“We had two (child care) applicants in our 2022 Community Impact Grant, so the board decided to help alleviate the burden of child care in Freeborn County,” she said. “They would award some additional funds with the same stipulations of the grant.”

So the Children’s Center and the Albert Lea Family Y each received an additional $3,500 that will go toward scholarships that fund child care within their programs.

“For example, the Children’s Center will be tuition payment for child care for families,” she said.

The money awarded to the Y will also go toward tuition payments for those children participating in summer camps.

Haag said child care has been identified by organizations as being a critical need.

“We know that child care is a foundation need,” she said. “If you want to work, you need child care. If you can’t afford child care, you can’t work. And it becomes a vicious cycle.”

The United Way also wanted to ensure children were being safe and not left alone before they were developmentally ready to be left alone.

“One of the reasons why the Y’s program is so important [is] that out-of-school time,” she said. “Often it’s at that age where maybe they can start being left home alone, and maybe not. But we know that sometimes that can create some hard decisions for parents and they just may not feel like they can afford to have their children participate in activities where they’re being educated, getting valuable lessons, having interactions with adults in a safe environment.”

Brenda Reed, co-executive director of the Children’s Center, said the organization applied for $10,000, but admitted it was exciting when she learned they would be getting an additional $3,500.

“It will help another couple families with their child care,” she said.

Reed, who learned they would get an additional $3,500 on Thursday, said the organization wanted to give discounts on child care tuition to at least 12 families.

“We’d like to thank the United Way for thinking of us when they were trying to decide where to put that extra money,” she said. “It was nice that they gave it to us.”