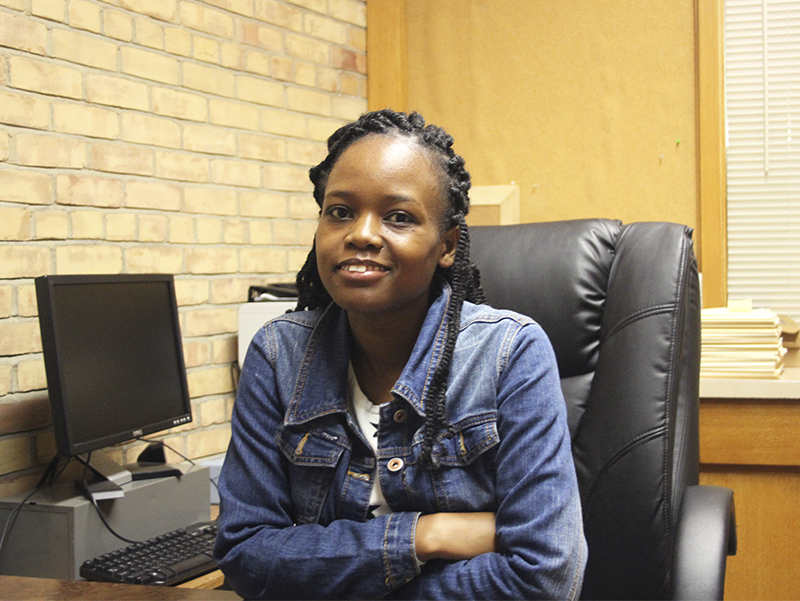 Tapiwa Manyonga, a native of Zimbabwe, will serve as an intern at Albert Lea United Methodist Church through mid-August, when she will return to Drew University. Alex Guerrero/Albert Lea Tribune

Moving to a new place can be scary, and having a familiar face nearby could help.

That was the case for Tapiwa Manyonga, a native of Zimbabwe and a summer intern at Albert Lea United Methodist Church who goes to school on the East Coast. But before arriving for the summer, she already had connections in the area.

“The pastor who helped me to apply is from here in Albert Lea,” Manyonga said, referring to a pastor who did missionary work with her in the Philippines back in 2018.

Before doing missionary work, she did development studies back in Zimbabwe with a focus on social justice.

For her, social justice included the rights of women and children, but she said the concept depended on where a person was.

“Where I come from, the main issues were child marriage,” she said. “So I was mainly into the rights of young girls who were being married when they were young.”

She also wanted to work in the ministry.

“I wanted to be a pastor, too,” she said. “So I needed a connection of ministry and social justice.”

After seeing a connection between ministry and social justice, she joined Global Mission Fellows, where she was sent to the Philippines and met the Rev. Randall Cirksena, pastor at Ellendale United Methodist Church, who encouraged her to apply to Drew University.

Cirksena told her about the Exploring Leadership Internship Project (ELI), which was developed in 2015 to “identify, encourage and support young adults who are exploring a call to ordained ministry.”

Manyonga also wants to see what she can do for the community, engage people and form relationships.

She described the people in the area as welcoming and said she felt “at home.”

“I really had a warm welcome (earlier this week),” she said.

And so far, except for church services, nothing has really surprised her.

Manyonga, who is here until the middle of August, is heading into her third year at Drew University in New Jersey. After graduation, she plans to stay involved in the ministry.

While interning, she will lead a Bible study in July, help lead worship and engage with the community.

She will have one year for Optional Practical Training in the United States.