A day out on the lake: Partnership with Park & Rec gets children out on kayaks 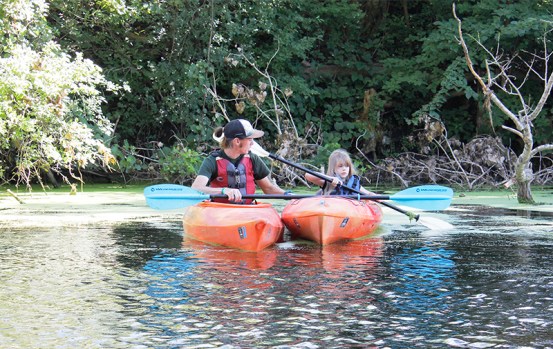 Alex Hagen, lead staff at the Albert Lea Rock Gym and Boathouse, talks with a student about navigating her kayak during a trip out on the water Thursday. Alex Guerrero/Albert Lea Tribune 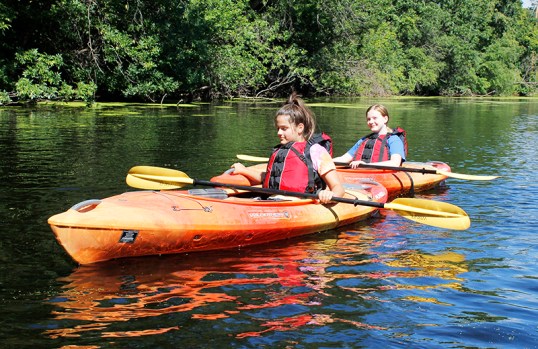 Some students have no problems navigating their kayaks in the water, while others struggle. Alex Guerrero/Albert Lea Tribune 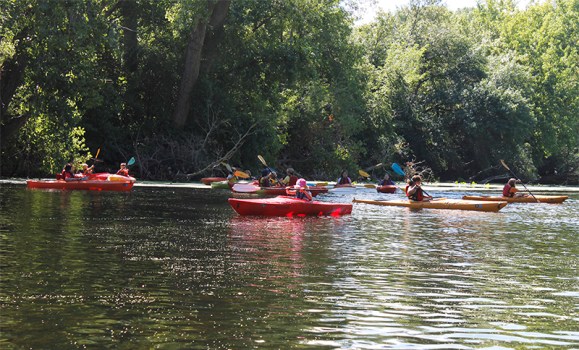 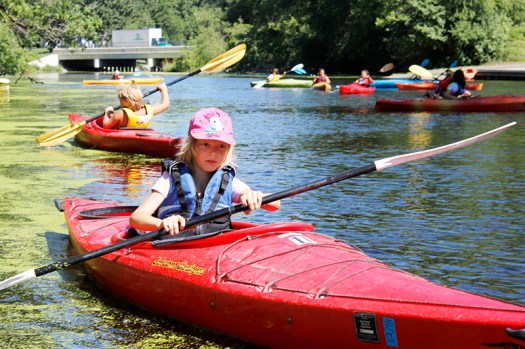 Students make it out past the overpass (background). Alex Guerrero/Albert Lea Tribune 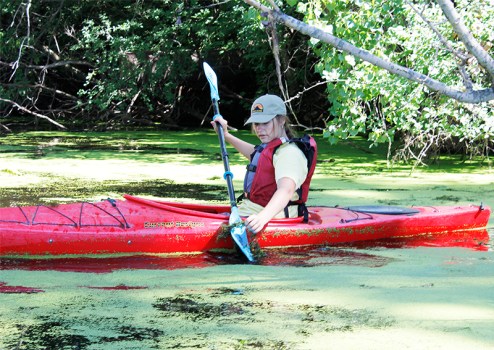 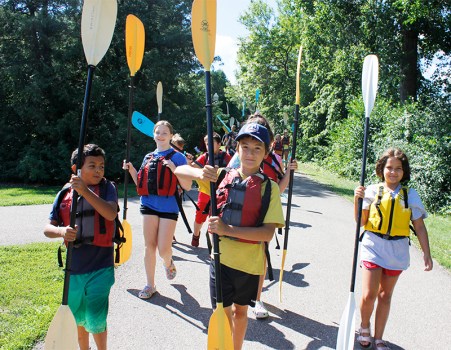 Students entering kindergarten through 12th grade had an opportunity to get in the water Thursday as part of a Boathouse Day. Alex Guerrero/Albert Lea Tribune

The sun was shining Thursday morning, and with temperatures not too hot or cold, weather was ideal for a morning of kayaking.

So in conjunction with Albert Lea Parks and Rec’s Play Parks program, Alex Hagen, lead staff at the Albert Lea Rock Gym and Boathouse, led around two dozen school-aged children between kindergarten and 12-grade on a kayaking trip, officially called a Parks and Rec Boathouse Day. The event started at Brookside Park.

“We’ve done other student events in the past, but this is the first year that we’ve set up this event with the Parks and Rec, their Play Parks program,” he said.

In fact, he said Dani Bakken, recreation coordinator, brought the idea up during a Community Education advisory meeting.

“She brought up the idea of collaborating with the boathouse to be able to do an activity like this to give kids other opportunities,” he said.

He said by giving youth new activities to try, he hoped by being on the lake they would build an appreciation for the local area.

“At the boathouse we’re kind of in a super unique position because of our location and what we do,” he said. “We have the equipment and we have the access to the lake that some of the other programs in Albert Lea don’t have.”

He noted that because of its location, there was easy access to Fountain Lake.

“With the other programs in town not … being in the position we’re in, the collaboration between programs that run in Albert Lea is a huge asset to our community,” he said.

Before the event started, Hagen’s goal was to get the students to Bancroft Park, though he and his students did not quite make it there.

His hope was for students to observe the clear water and differences between duckweed — which was good for the lake — and algae.

“First and foremost, we try to get the kids comfortable in their kayaks,” he said. “I believe that when a kid is regulated and calm, they’re ready to learn.”

Hagen also planned to talk about the lake’s ecology, though that did not happen.

“We can talk about the duckweed and how beneficial it is for the local waterfowl, the way it oxygenates the lake it actually puts oxygen back into the water through the photosynthesis,” he said.

And he did not get the opportunity to discuss the types of fish within the lake.

But they had fun, which was his biggest goal for the event.

Jenna Steffl, part of the boathouse staff, said kayaking was a “pretty easy thing” to learn and was happy to do this.

“I really enjoy working with kids,” she said. “I’ve worked with kids for a long time, I volunteered in the schools, I’ve done a [number] of things with kids, and I really enjoy watching the kids grow and learn new skills and learning how to use the beautiful lake and [natural] water on this is a really cool thing that they have an opportunity to do that they don’t in a lot of other places.”

Her goal was for the students was to gain confidence in their abilities to try things.

Hagen noted if the new program gained enough interest, there was potential to expand the program.

He said he’s led students in kayaks, canoes and paddle boards on the water before this summer, and in June Albert Lea Community Education held a targeted services program for summer school students.

During that day, students got to experience different activities including kayaking, yoga and rock climbing

As the pilot year for the program, Hagen was hopeful to continue it next summer, but for students who would like to experience a Boathouse Day before school starts, there will be another next Thursday. Preregistration is required, and can be done through alschools.ce.eleyo.com/.