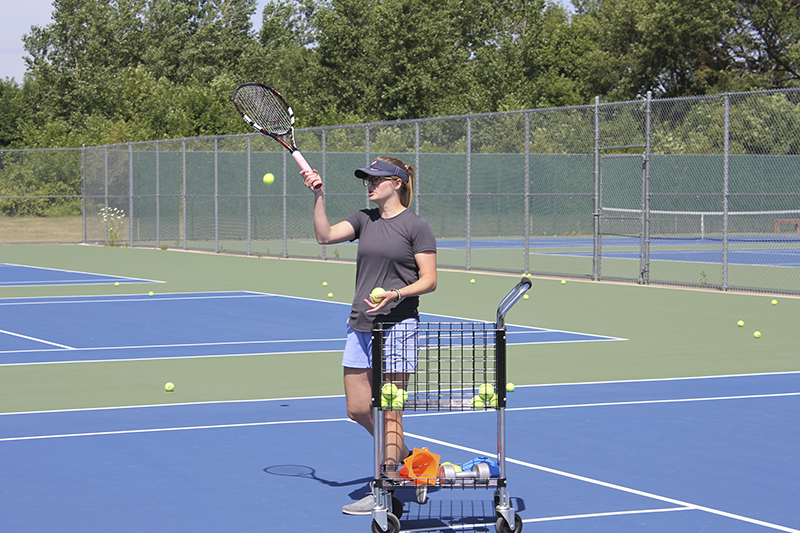 Jennessa Runia-Bade was recently named Section 1AA Coach of the Year for her coaching of the Albert Lea boys’ tennis team.

Runia-Bade grew up in Montevideo, where she started playing tennis at a young age.

She stuck with tennis and fell in love with the sport because of her coaches.

She went on to play on the tennis team in high school.

“I joined the team in seventh grade and played mainly singles throughout my high school career,” she said.

When she left for Gustavus Adolphus College to major in biology, she didn’t have as much time for tennis. She still made time for it, though, and it was there that she started to get into coaching.

“I felt I didn’t have enough time to commit for the varsity team, so I joined the club tennis team instead,” Runia-Bade said. “The next year I became the coach, president, treasurer, van driver and player, that is how I got into coaching.”

Runia-Bade moved to Albert Lea four years ago and started helping the tennis teams right away and stuck with it.

Tennis is frequently described as a “lifelong sport,” and that is one of the reasons Runia-Bade loves it, as well as the bonding aspect of the game.

“I love tennis because you can play with friends and/or make new friends,” she said. “It is also a lifelong sport, so once you learn you can continue playing at any age.”

Coaching isn’t always easy but Runia-Bade keeps coming back to it to help shape young lives.

“I keep coming back to coaching because I want to make better humans and positively impact lives,” she said.

“One way to accomplish that is through sports by teaching life lessons such as work ethic, accountability and love of community, which are all part of our core values at the high school.”

Runia-Bade acknowledged that the team is only as good as they want to be and put the effort into being.

“We will perform as well as we prepare.”

She also mentioned that she is not focused on winning because “it is out of our control.” She wants to focus on things that they can control.

“I focus on the mental and physical aspects that we can control and prepare for before our competitions,” she said. “If you prepare to your best ability and play to that best ability then the outcome you get is the best you could hope for.”

Runia-Bade said she was surprised when she found out she was named section coach.

“It was a really tough season for me not having an assistant coach,” she said. “I often doubt myself as to if I am doing enough to be a positive and influential coach and doing it alone was even harder. As surprising as it was, it was nice to be acknowledged by other coaches for the hard work put in.”