A year with Marion: Marion Ross bronze statue celebrates one year since unveiling 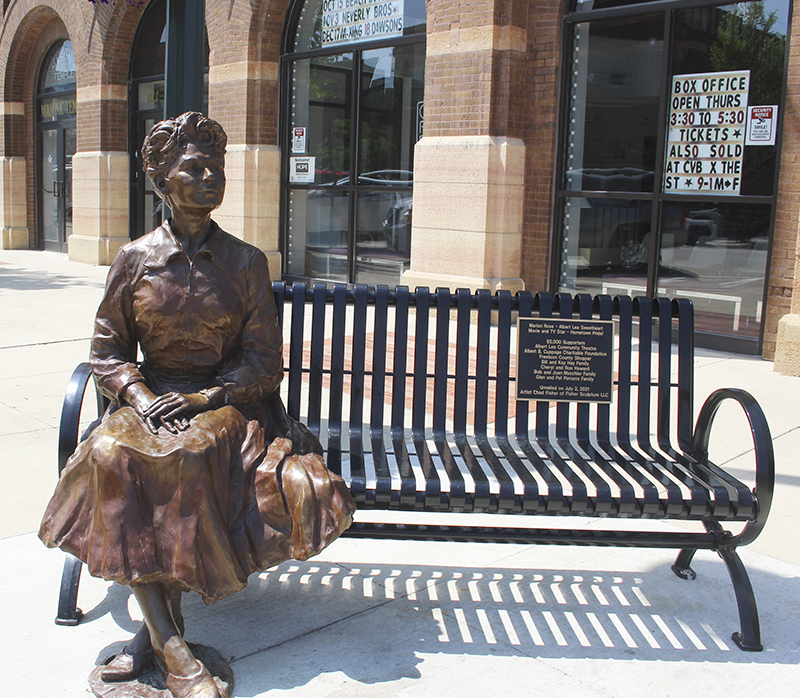 The Marion Ross statue, which sits next to the theater that bears her namesake, is celebrating its one-year anniversary this month. Alex Guerrero/Albert Lea Tribune

Actress Marion Ross is celebrating her first year this year.

Not her birthday, which will be in October, but rather the one-year anniversary of the bronze Marion Ross statue that sits outside the performing arts center in her name at 147 N. Broadway Ave.

“I’ve been involved with the theater for so long, like 50 years,” said Glen Parsons, chairman of the committee that raised funds for the project. “I was aware of all the things that Marion gave to the theater and to the Art Center through the years.”

And because he felt much of her work was unsung and did not get recognition, the committee felt it was time.

“She has performed here, and we just felt like she was so proud of coming from this community and had continued to support the theater and the arts that it was like, ‘Gosh.’ It just seemed like she was kind of our hometown hero and we just wanted to be able to say thanks,” he said.

In fact, Ross grew up in Albert Lea and moved to Minneapolis around the age of 15 to attend what is now the MacPhail Center for the Performing Arts, part of the University of Minnesota.

“She was determined to be an actress, and so she kind of followed her dream,” he said.

She found success as Mrs. C on “Happy Days,” and has also made appearances in “Gilmore Girls” and as the voice of SpongeBob SquarePants’ grandmother.

But Parsons said she never forgot about Albert Lea and always referred to the town as home. To this day, she tries to stay connected to the area even though she lives in California.

The statue, which started when Ross was 91, took two years to complete because of COVID.

The project began with a national search for a sculptor with six the committee looked at.

But one artist, the one chosen who worked in Pennsylvania, offered them a “good” deal and said if they could work between January and May it would fit their schedule.

The total cost of the project, including but not limited to the statue, cost about $100,000.

According to Parsons, the artists — Chad Fisher and his dad — do projects all over the country and are constantly at work.

“We felt really comfortable, and actually Chad came here and looked at the corner where it would go so that he’d know how to angle her and whatever,” he said. “Then he spoke with a group of us just about his plan and how it would work.”

In terms of upkeep, Parsons said nothing has been done to the statue, but said sometime within the next year Fisher will come back and inspect it for maintenance purposes.

All of the engraved bricks purchased to support the project have been installed nearby, and Parsons said the only piece of the project not finished yet is a plaque that will be installed in front of the theater with a quote from Ross, which says much about her hometown and what it meant to her.

He encouraged people to check it out once it is in place.