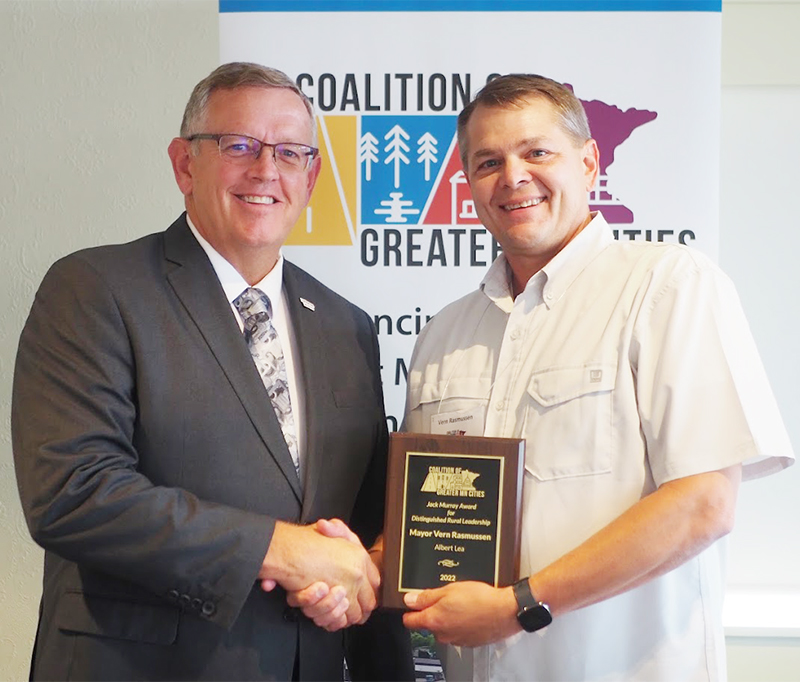 Albert Lea Mayor Vern Rasmussen Jr. was recognized by the Coalition of Greater Minnesota Cities (CGMC) with the Jack Murray Award for Distinguished Rural Leadership on Thursday during the coalition’s three-day summer conference in Red Wing.

The award is given to city officials who demonstrate knowledge, leadership and active participation in CGMC program areas over their public service career. The award is named for Jack Murray, former mayor of International Falls, who was instrumental in the CGMC’s formation.

Rasmussen, who announced earlier this year that he will not be seeking re-election, has served on the Albert Lea City Council since 2004 and as mayor since 2011. Throughout his tenure, he has been actively engaged in the coalition and a regular presence at the organization’s conferences, lobby days and other events. At the Capitol, Mayor Rasmussen has been a staunch supporter of the CGMC’s infrastructure and economic development initiatives.

“Mayor Rasmussen is well known and respected by legislators and city leaders across the state,” said Pat Baustian, mayor of Luverne and president of the CGMC. “He has strongly represented the organization during interviews, committee hearings, and meetings with legislators. Albert Lea and all Greater Minnesota cities have benefited from his relentless advocacy.”

CGMC is a nonprofit, nonpartisan advocacy organization representing over 100 cities outside of the Twin Cities metropolitan area. The Coalition educates legislators about issues important to Greater Minnesota.