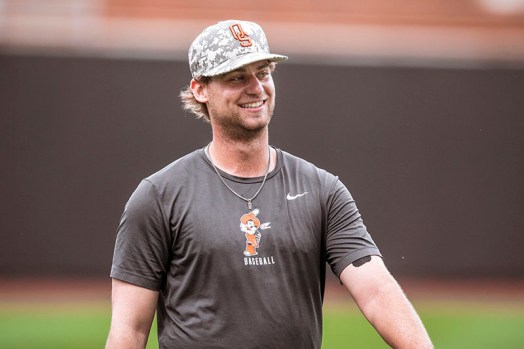 Jake Thompson of Albert Lea received numerous honors this year in his baseball career and this week was offered a contract with the Miami Marlins. Provided 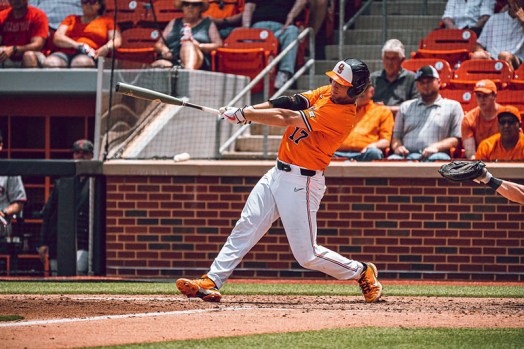 The 2022 goal for the Oklahoma State Cowboys was to make it to Omaha and win the College World Series. They had the seven seed in the country going into regional play, which secured them home field advantage in the super regional also.  Unfortunately, the dream came to an end with regional final loss to a hot Arkansas team.

Even though the Cowboys didn’t achieve their goal, former Albert Lea Tiger Jake Thompson had a banner year, most recently with being signed to play Major League Baseball with the Miami Marlins.

Thompson led the Pokes with qualifying at bats in Average, OPS, hits, 2B, 3B, RBI, total bases, slugging percentage, walks and on-base percentage. He also had the most multi-hit games, multi RBI games and reached base streak.

Thompson started the year being named a preseason first-team Big 12 player. He fulfilled the preseason honor by receiving Big 12 First Team Outfielder at the close of the year.  He finished in the top 10 in the Big 12 in 10 offensive categories.

On May 19, the Dick Howser Trophy Committee released the list of semifinalists for the 2022 Dick Howser Trophy, the most prestigious award in college baseball, which is given to the top player based on two rounds of national voting.

The Albert Lea native and former left fielder for the Oklahoma State Cowboys was named to the top 40 players list. Just to be named on this exclusive list is an incredible honor for Thompson.

Former winners include Robin Ventura, Buster Posey, David Price and many others who continued on to have All-Star careers in the MLB.

The honors kept rolling in for Thompson as he was named Academic All Big 12 first team with a 4.0 grade point average. He was also honored and received CoSIDA D1 Academic All District 7 Honors for his combined performance on the field and in the classroom.  He advanced to becoming only the fifth Academic All-American in Cowboy baseball history. Thompson, a graduate student for the Cowboys this season, was named to the 2022 CoSIDA Academic All-American Second Team as an outfielder.

Thompson has grown up with his goals written on Post-It notes stuck to his bathroom mirror. A majority of those boxes have been checked over his high school and college career, but two were highlighted and were yet to be achieved at the end of the season.

On June 15, he checked off another box as he was named to the 2022 NCBWA All-American third team.  With all the accolades and honors, Thompson still had one box to check.

Thompson cheered as four of his former teammates from summer ball and OSU were selected in the first round. At age of 24, Thompson knew the chances of getting drafted were minimal even with the outstanding statistics and honors he accomplished at the Cape Cod League and in college this year.

Day two came and Thompson’s phone rang with promising news.  A few MLB teams reached out with money figures and didn’t guarantee, but said if things worked out they would pick him on day two. Day two came and went and his name was not called.

Thompson knew he wasn’t going to get picked on Day 3, rounds 11 through 20, so instead of wasting time watching and stressing out, he chose to hit in his batting cage in Albert Lea.

“At the beginning of the draft I really wasn’t that nervous, because being 24 with no leverage to return to school, I figured I would need to receive a free agent call, but when they called me early day two, all that changed,” he said.

Thompson finally received a call that he will remember the rest of his life.

Wednesday morning, the Miami Marlins called and offered him a free agent deal, and Thompson wasted no time accepting it.

“I was so pumped up, I really didn’t know what to do or say. I was ‘Yes, I want to be a Marlin!’ When I hung up, my dad and mom came upstairs and Dad asked, well, who was that? Miami, they offered me a contract!  Then the celebrating flowed out.”

Twenty-four hours later Thompson was on a plane headed to Jupiter, Florida, to start his pro baseball career.

The Post-It note box was checked.

“I’ve been waiting to do that a long time,” he said. “I’ve got a new set of goals written out and ready to be stuck to the mirror.  This goal is achieved, and now it is time to get to work on the next one.”

Thompson has his opportunity and his goals in sight.

It’s time for him to start “raking” in Florida.