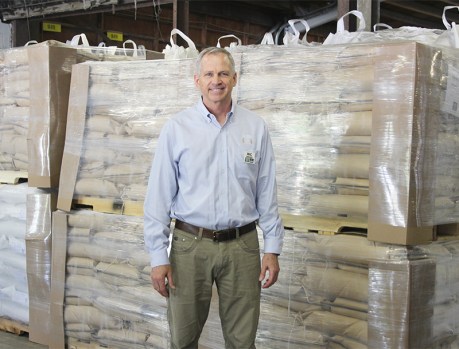 Mac Ehrhardt, co-owner and president of Albert Lea Seed House, has been working on the acquisition of Blue River Organic Seed for almost a year. Alex Guerrero/Albert Lea Tribune 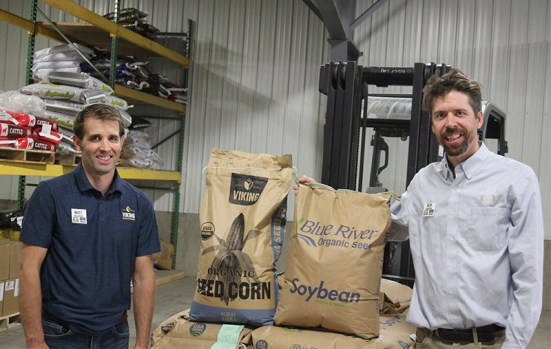 “Albert Lea Seed House is engaged in selling seed across the northeastern third of the U.S.,” said Mac Ehrhardt, president and co-owner of Albert Lea Seed.

His goal for the acquisition was to become the strongest supplier of organic field seed in the United States, something he called a realistic goal.

That sentiment was shared by Matt Helgeson, another co-owner of Albert Lea Seed House.

“Hard to put a number on it, but ultimately we expect we’ll be the strongest and perhaps the largest organic seed company in the country,” he said.

Erhardt said he initially met with Blue River last September, and had been in discussions since then. A letter of intent was signed at the beginning of May, and a purchase agreement and payment happened last Friday.

Erhardt said there would not be any physical expansion of Albert Lea Seed House, but said the company would take over a 40,000-square-foot warehouse and office building in Ames.

“The biggest piece of this expansion, really, is our sales,” he said. “We are going from being a regional seed company to a national brand.”

Erhardt said the company was in the same space when it came to selling certified organic farm seed, specifically corn, soybean, alfalfa and sorghum seed, but Blue River brought a national brand with sales in the Pacific Northwest, the Northeast and the South as well, something Albert Lea Seed House did not do. Essentially, Erhardt said, the company is doubling the size of its organic seed brand.

“It’s really an expansion of our sales staff,” he said. “Along with the purchase, we’re bringing aboard four new sales people that are devoted to different regions of the United States that we haven’t covered previously.”

This was the first time Albert Lea Seed House acquired a company, and he admitted there were surprises in acquiring the company.

“The big surprises for us were, A, how long it took for negotiations to go on, and also getting to the table, thinking we had a deal and having it fall apart, and then a month later having it restart and restart that process,” he said. “It’s been a little shocking how long the whole process has taken.”

Before the acquisition, Erhardt said the company reached out to customers at both Albert Lea Seed House and Blue River Organic Seed, as well as their dealers.

“The reception by and large has been very favorable because Blue River Organic Seed is a well-known brand of organic seed, but it was owned by a company that was not specifically interested in organic seeds,” he said. “Farmers Business Network is a large, venture-capital company that’s mostly interested in selling directly to farmers, mostly chemicals and fertilizer and other ag inputs.”

Erhardt said Farmers Business Network did not have a strong interest in selling organic seed.

Farmers Business Network asked Albert Lea Seed House to not reveal the price of the acquisition.

Helgeson said the acquisition was to favor farmers.

Erhardt said in the short-term, employees of Albert Lea Seed House, who will remain in their current roles, should expect more work.

“We have to continue to do what we did before, which is process seed, arrange seed, sell seed,” he said. “But now we have to integrate two companies, so it means more work for them.”

For employees at Blue River Organic Seed, he said things would change.

Helgeson said there would be a brand evaluation over the next several months and determine the future of the two brands.

“Blue River, ever since I started it back in 1999, our focus was selling seed to organic farmers,” he said. “We had no business other than selling to organic farmers. We didn’t sell to conventional farmers or anything else.”