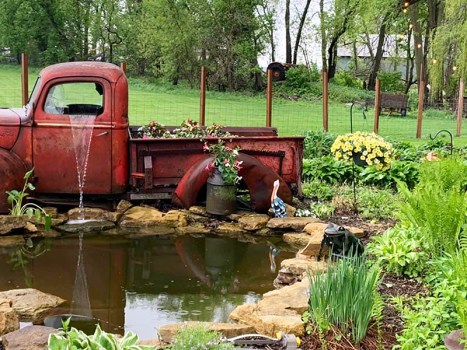 A waterfall coming out of a pickup truck is one of the many unique features of this year's Art & Garden Tour. Provided 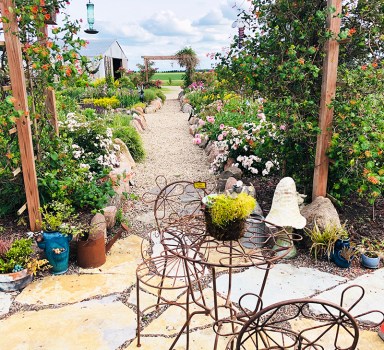 This garden starts in a greenhouse and works out to a little garden shed. Provided 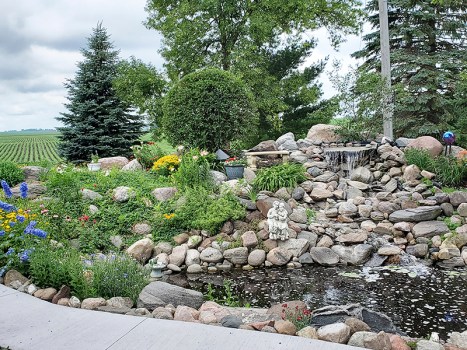 One of the gardens that will be on display during this year's Art & Garden Tour. Provided

Beth Tostenson and Joyce Purdy will co-chair the event, a staple within the community for over 30 years.

“[People] have enjoyed it, and that’s why we carry on and continue to do it,” Tostenson said. “They start asking early on, ‘Are you going to have the Art & Garden Tour again this year?’ And they look forward to it and set aside the time to go.”

Posters have gone up, and announcements have been posted to social media.

“Each year it’s like a challenge in a way,” Purdy said. “It’s not the same gardens being promoted or whatever over the years. It’s just all different stuff.”

She said creating the tour was always a surprise and said that was part of the fun in making these tours.

“When we go out, cause we see the gardens early, and so what we see early on, and then what we see that’s all changed during that time, it’s just amazing to be able to see what still is growing and things like that,” she said.

This year’s challenge was dealing with the cooler than average spring temperatures.

“It’s taking a drive and you’re going to be exploring the gardens of Freeborn County,” Purdy said. “Not only the ones that are right here in Albert Lea.”

With some of the gardens out of town, she hopes this year’s route is easy to follow.

Tostenson said she wanted to branch out because of the unique gardens in the outlying area.

“Some of them are on the Garden Exchange, and that’s how we got word that they were out there,” she said.

She described the Garden Club as people who were passionate about their gardens and wanted to exchange ideas besides seeds and plants.

According to Tostenson, each garden will also include artwork.

There will also be a garden with sculptures made of shovels and gears.

“It’s worth the trip, definitely,” Purdy said. “Just the variety that’s out there.

“This year, too, it’s not like the traditional one that we would do.”

Tostenson said one garden had a 10-foot water feature with flowers. And that was not the one with a car.

“One of them has a pickup truck, and they have a waterfall coming out of the pickup truck into a pond,” Tostenson said. “And then there’s flowers all around it.”

Tickets, $15/person, are available at Whimzy, Addie’s Floral & Gifts and the Art Center. They will also be sold at each of the gardens.

“If somebody lived in Hartland, let’s say, they could go to the two gardens there and purchase their tickets there and then make the route,” Tostenson said.

Another interesting aspect about this year: the changing demographics of those participating.

“Some of these used to be, mostly it was women that would probably go out and that, but we’ve really seen a change in that,” Purdy said. “It’s couples that are out. Actually, a friend of mine, it’s their 50th wedding anniversary, and … they went to the She Shed Tour.”

Terry Fox and Dennis Johnson, 409 Lakeview Boulevard (park on Lakeview Boulevard); artist Carolyn Reeder. Reeder is a watercolor artist who incorporates rural settings and is always trying to put a new spin on her paintings and will try new methods whenever an idea comes to mind.

Hunnicut Hallows Garden, 31679 640th Ave., Hartland (go west out of Hartland on Highway 33, which curves north on 6. The gardens will be on the left side of the road); artists Judy Tweeten (Friday) and Sue Drayyer (Saturday). Tweeten uses oil, acrylic and watercolor while painting traditional landscapes, portraits and florals. Draayer, from MnM Creations, uses scrap iron to create unique objects everyone can enjoy, especially in a garden setting

Deb Flatness, 610 William St., Hartland (turn by the school and look for the corner of Willow and William); artist Maureen LaCore. LaCore, who began painting about 3 1/2 years ago, is a self-taught artist who enjoys experimenting with different styles and subjects.

Michelle and Mike Peterson, 200 First Ave. SW, Clarks Grove. With a locally-owned garden center, the Petersons have a small succulent planting project for everyone to participate in. There will also be refreshments.

Hillbilly Heaven, 85365 263rd St., Hollandale (at Maple Island turn south on Highway 30, at 260th Street turn left and then turn left on 263rd Street); artist Adam Wilkie of KC Pottery. A 2006 Albert Lea High School graduate, Wilkie worked in floral design in Denver for eight years before returning to Minnesota to join his father, Bill. Together, the two create a full line of dinnerware along with complimentary service and baking dishes.