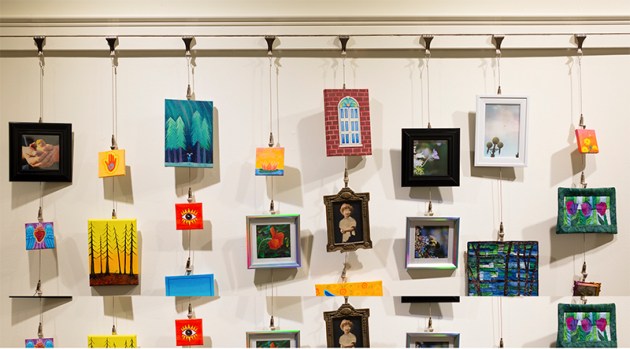 "Mini Treasures" features over 80 pieces, and every work had to be no more than 8-by-8-inches in size. Photo provided by HMX Photography 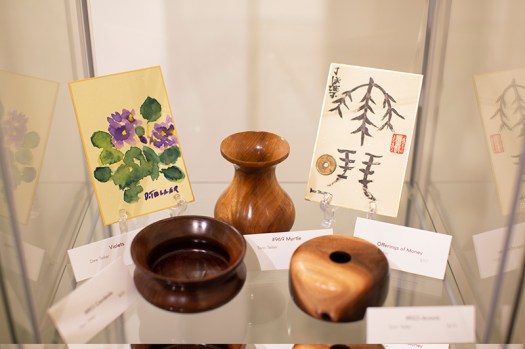 Some of the work that is on display during the "Mini Treasures" exhibit, which runs through Aug. 27 at the Freeborn County Arts Initiative. Provided

According to Elisha Marin, director of the Arts Initiative, all of the accepted pieces had to be no more than 8-by-8 inches.

There are even miniature quilts by Northfield-based textile artist Kathy Weed.

“No one expected her to be able to do something 8-by-8-inches or smaller,” said Susanne Crane, curator for the organization. “It’s just not what she does.

“And she came in with some absolutely beautiful pieces. That was one of the great surprises.”

According to Crane, the mixed mediums include everything from paintings, wooden sculptures, metal work and books to textiles, pottery, photographs and mosaics. Mixed shows are composed of emerging as well as professional artists.

“We’ve had this scheduled for a while,” Crane said. “The reason it didn’t happen earlier was we went to online and we didn’t think the miniature show would look as great online as it does in-person.”

“Mini Treasures” has been in the works for three years.

“We’ve changed some things over COVID of course,” she said. “We had to flex, and so we moved our ideas around a little bit and shifted what would be happening during that time online.”

She said the show features some new artists, and there were some surprising pieces by artists who generally work on larger pieces.

And because this is a mixed show, anyone could submit a piece for consideration.

“There was a jurying process to this,” Marin said. “Artwork was submitted, artists were allowed to submit … 24 pieces in the exhibition.”

Marin said typically artists would be allowed to submit between three and five works for a group show.

Marin said a typical call for artists goes about a month or so in advance of an exhibit, but because “Mini Treasures” had been in the works for awhile, Crane said artists knew about the exhibit for a while, as well. Marin added that a goal for the Arts Initiative was to develop “fresh and vibrant programming.”

The idea was to challenge membership artists who were more accustomed to working on pieces on a larger scale, such as a sumi-e brush painter.

Crane added that the Arts Initiative did not feel a need to pivot the show after the Albert Lea Public Library held a similar program last month.

“The shows don’t always come from one direction,” she said. “They come from the community, from people on the board, and someone thought this would be really fascinating and we decided to roll with it.

The exhibit, which features 24 artists displaying over 80 pieces, will run until Aug. 27, and works will be for sale, many of the pieces under $100.

In holding “Mini Treasures,” Crane wants visitors to be both amused and impressed.

“I think the show has a lot of energy in it, and I think it’s an uplifting show,” she said.

Marin added this was an opportunity for people to see regional artists.