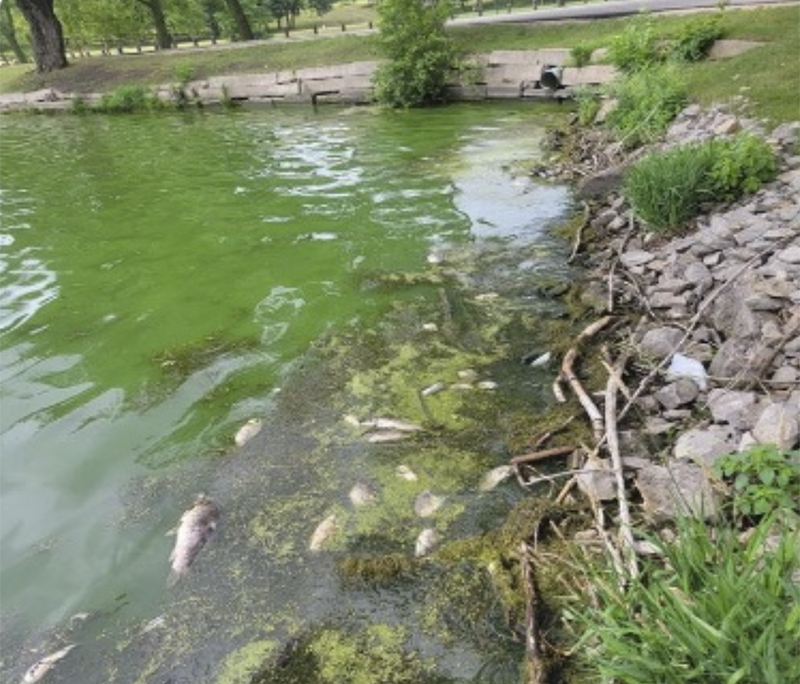 Dead fish are seen along the shoreline of Fountain Lake near Edgewater Park. Provided

If you haven’t noticed, dead fish — specifically common carp — have been appearing at Fountain Lake.

Soupir’s team found between 1,000 and 2,000 dead common carp scattered around the lake.

“They didn’t do an exact count, that’s kind of a ballpark estimate,” Soupir said.

Soupir also admitted to not knowing the total population of common carp within the lake.

So samples were sent to the DNR’s pathology lab in St. Paul. The lab typically tests common carp for several different viruses specific to common carp.

“It did come back as a positive for Koi Herpes Virus,” he said.

Koi Herpes Virus, also referred to as KHV, impacts common carp, and common carp only. In fact, according to Soupir, KHV cannot harm humans or other fish species.

“It’s carried by a group of carp, a carp species that includes common carp and also koi, which is kind of a domesticated version of a common carp,” Soupir said.

He said KHV was documented in southern Minnesota in the last five years.

“There was a large event on Lake Elysian in Waseca County, July Fourth weekend ironically, in 2017,” he said. “That was really the first time that they identified KHV in a big kill like that.”

Since then, there have been more, after KHV was identified by a University of Minnesota lab as Soupir did not have the capacity to test for it, but he believes the virus has been around for “awhile,” even if they were not testing for it.

“We’ve had cases of carp-only fish kills quite frequently,” he said. “In fact, in 2017, we had a carp kill on Albert Lea Lake that we did go down and collect samples from, and this was right after that we discovered the one on Elysian — what it was.”

During that visit, KHV was again discovered in the Albert Lea Lake fish kill.

“KHV is not new to the Albert Lea area lakes, it’s been around for awhile,” he said.

According to Soupir, there was a fish kill on Fountain Lake last year, and while he and his team could not get fresh samples to verify if the kill was caused by KHV, he “strongly suspects” it was the virus.

To that effect, KHV has become an ongoing issue and said there was not much he could do other than let the disease run its natural course. Soupir estimated up to 40% of the common carp in a lake would die from KHV, something he said would be good.

“Trying to keep carp numbers down is always a goal at the DNR, and our partners are looking at water quality because common carp are kind of bad for water quality,” he said.

As for why it’s happening now, he said one reason was because common carp were plentiful, and pointed to a statistic that the average common carp abundance per net was four to six. Last year, that number was closer to 10.

He also said now was the time of year KHV kills were more common, as they were related to common carp spawning, which happens in 68- to 82-degree waters

“It’s really helpful that we get fresh samples,” he said.

If anyone is worried about potential harms caused by handling a fish with KHV, Soupir said don’t be.

“They shouldn’t pose any harm or direct risk to humans at all,” he said.

He also recommended wearing gloves when handling any fish from a fish kill, and to not eat any fish if you do not know its cause of death.