Claire was born in Madison, Minnesota on October 30, 1922 and died in Hayward, Wisconsin on July 25, 2022. She was the eldest of six children born to Carl Graff and Anna Dolman Graff. 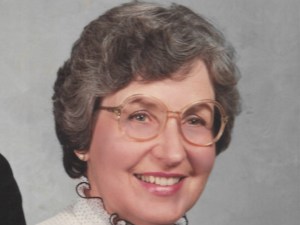 After graduation from Madison High School in 1941, she earned her Teacher’s Training Certificate from Madison Teacher’s Training. In 1942 she married Donald R. Jacobson, a First Lieutenant in the United States Army, where she worked as a secretary on army bases across the country during WWII. After the war years, they settled in Albert Lea, Minnesota and raised their three children: Katherine, Virginia and Mark. When her children were quite young, Claire collected signatures and went to the city council to spearhead an effort which resulted in a neighborhood skating rink. She sewed most of her daughters’ clothes, and in their college years, regularly acquiesced to overnight last- minute requests for recital dresses.

A leader in church and community organizations, she served as President of the Church Women of First Lutheran Church, student and eventual teacher of the Bethel Bible Series, Campaign Chairperson of the Albert Lea Civic Music Association, and Chairperson of the annual Albert Lea Arts Festival.

With two daughters in college, Claire involved herself more deeply in the family business, becoming Vice President of Jacobson Music Co. in 1966. Soon after, she and her husband proudly watched both daughters graduate from St. Olaf College.

Claire and Don moved to Hayward, Wis. in 2003 where she was a member of First Lutheran Church, active in the Newcomer’s Group as well as numerous arts groups. A talented visual artist who painted in several mediums, her main interest was watercolor, with an output of over two hundred paintings. Beginning to paint seriously at the age of eighty, her son-in-law quipped that she was “giving Grandma Moses a run for her money.” Once she moved to Hayward, one of her greatest joys was her weekly painting group of artist friends. Over the years she would create original watercolors on cards to send to family and friends on special occasions.

It was her wish that donations in her memory be sent to Save the Children, www.savethechildren.org

A memorial service has not yet been set. Interment will be at the Northern Wisconsin Veterans Memorial Cemetery next to her husband.

Please leave your condolences for the family at www.bratley-nelsonchapels.com.