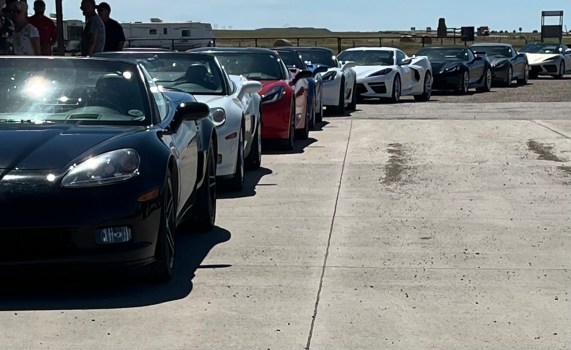 Corvettes with the local car club line up on a recent outing. Provided

A group of local Corvette enthusiasts is hosting a car show centered just around Corvettes this weekend that they say could draw more than 300 cars from Minnesota and the surrounding states.

People with all eight Corvette models from 1953 through 2023 are invited to participate.

“This is a very unique event to have a car cruise-in event for just Corvettes,” said Don Blake, one of the organizers. “It’s something we’d never heard that had been done before in southern Minnesota.”

There is no cost to enter, and food and drinks will be available for purchase. There will also be a disc jockey.

Though there will not be class awards for participants, there will be one Best of Show Award given out by the Lakes Corvette Club in memory of the three founding members the group lost in the last year alone: Mark Peterson, John Enger and Al Greenman. Club members will also recognize the widows of the three men who died.

Blake said he got interested in Corvettes in the 1960s when the C2 model — the second of the eight Corvette models — was out.

One of his friends had been in the military, and when he got out was working in Los Angeles and was looking for a 1963 Corvette split window coupe. Blake said his friend found one for sale in Phoenix and in 1968 went down and bought the car from the original owner. He brought the car back to Albert Lea in 1970.

“When I first saw that car I said, ‘Someday I’m going to own that car’ — that was one of my favorites,” Blake said.

That friend ended up trading the car for a 1964 Chevrolet Impala to have a vehicle with more space for his family. Blake said the new owner had some problems with the car and put it in storage for 26 years until Blake purchased it in 1996. He has since done a complete restoration of the car.

He said the local Corvette car club started in 2017 and currently has 19 members. The members meet each month, and during the months of May through October, weather permitting, they host a cruise in their Corvettes with their wives to a nice restaurant or place to host their meeting within about 40 miles.

The idea for the Albert Lea show came about last fall when the group had a club meeting at Wedgwood Cove. Blake said they were in the Chardonnay Room when owners Gerry and Jerry Vogt walked by. He said he talked to them and they got on board with the idea and then moved forward with the plans.

The group had posters made up to start promoting the event, and posters and information about the cruise-in have been distributed to other corvette clubs in Minneapolis, St. Paul, Rochester and Owatonna, among others. Word has also gone out to the Corn Huskers Car Club in Nebraska, the largest Corvette club in the country, as well as groups in Iowa.

“We feel like we’ve gotten the word out very well,” Blake said. “The response we’re getting sounds to be very, very good, but of course all of this is predicated on having good weather. If we get some decent weather, we are expecting anywhere from 300 to 600 Corvettes.”

They have estimated there are 125 Corvettes in the Albert Lea area alone.

While the event is geared toward Corvette owners, it is open to the general public as well.

Blake said in addition to the cars themselves, there will be posters on display to explain more information about each of the eight Corvette models.

The event is sponsored by Wuerflein Chevrolet of Albert Lea and United Employees Credit Union.