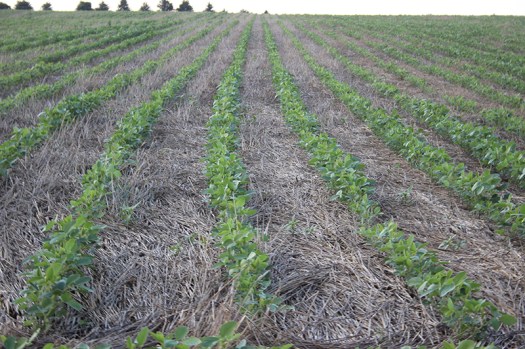 The current status of plants from field one of Hunnicutt's experiment. Alex Guerrero/Albert Lea Tribune 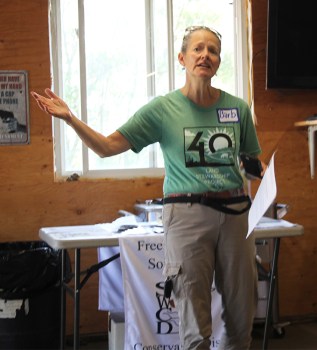 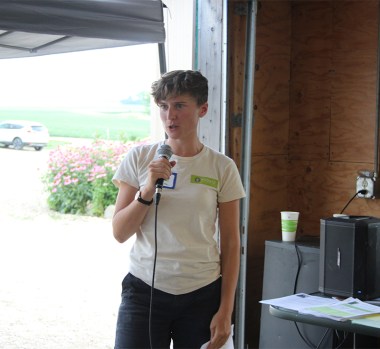 Lėa Vereecke, a research specialist and farm consultant, shares her thoughts on what to expect from the three different fields and how they were treated. Alex Guerrero/Albert Lea Tribune 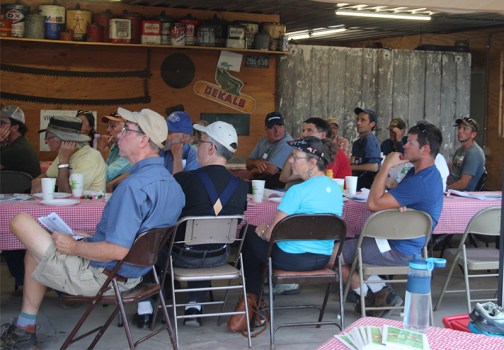 Those who attend enjoy a catered meal from Smokin’ Barrel while listening to the presentation. Alex Guerrero/Albert Lea Tribune

HARTLAND — Farmer Mike Hunnicutt, who works organically with row crops and small grain and organic canning crops, hosted a Freeborn County Health Field Day Wednesday with the help of his family and a team from Land Stewardship Project at his farm outside Hartland.

“A field day is an opportunity for other farmers, community members, who are interested in soil health,” said Barb Sogn-Frank, soil health program organizer with the Land Stewardship Project. “Particularly, this is a really great opportunity for farmers who are either interested in or already practicing regenerative agriculture practices, specifically no-till, roller crimping planting soybeans into rye.”

According to Sogn-Frank, the event allowed people to come together and engage in peer-to-peer conversations and hear from resource specialists. This particular event included Lėa Vereecke, a research specialist and farm consultant.

“This is an opportunity for neighboring farmers to learn, to hear their stories, share their own stories, sit at a table and consider questions together about some of the challenges of certain techniques and to hear from other people,” she said.

This meeting was about no-till and cover cropping.

“[Hunnicutt] is really doing a bold and well-thought-out experiment,” Sogn-Frank said. “He’s doing this in cooperation with another friend of his who farms not far from him, James Koziolek. And together they have customized their machinery, which is what a lot of people do in order to make stuff work.”

He started by planting rye last fall at different times, letting it sit over the winter and roller crimping the rye this spring and planting beans without tillage.

“[It’s] not common occurrence in this area,” he said.

He decided to try so after attending previous field days and talking with other farmers.

“I decided to do this method of research … on my field to see, one, which way is most cost-effective, and two, to see the results of the turnout,” he said.

He also looked at the health of the soil in deciding to do this.

“One, to keep the nutrients that are there, two, hold the soil as we want it and to make the soil more sustainable to farm with,” he said.

He described the results so far as “very good” but admitted there were ups and downs, but generally more positives.

“Different trials that I’ve done have turned out better,” he said, referring to the presentation of the crop.

He has also dealt with weather issues out of his control.

“Rain would have helped me make beans grow a little quicker,” he said.

Hunnicutt’s project will end this fall, but expects to do this again.

“I feel that it’s very … regenerative type of farming that is going to be more apt to hold processes down the road,” he said.

According to Hunnicutt — who did this as a personal science experiment — roller crimping rye was four times more cost-effective when it came to passes compared to the other two fields he used. And while he plans to do the same thing next year, he said he would not use as big of a plot because of rotation of the crops.

“I won’t alter what I’ve done, I’ll just add things to it to try different methods,” he said, referring to the rye crimped with the soybeans planted in it. “Same methods, just added steps in the methods.”

Sogn-Frank wanted people to draw inspiration, encouragement and a sense of community from the event.

“It can feel lonely out there when you’re trying to implement practices that you aren’t necessarily surrounded by,” she said. “It’s very exciting that practices like using more cover crops, keeping fields covered more of the year, that movement is growing but it’s still less than … 5% of all the tillable acres in Minnesota, farmed acres,” she said. “…That soil coverage is really vital for controlling erosion on that farm, sequestering carbon, filtering and saving water and just having a lot healthier soil for healthier production.”

Sogn-Frank added that besides having cooler air in covered acres, uncovered soil is hotter, meaning it is more likely to kill the “life of the soil,” microbiome, which is vital to healthy soil and plants.

Field Days have been in place for six years now offering workshops, events and webinars.

Registration for field days is required, and upcoming projects can be found online through the Land Stewardship Project at https://landstewardshipproject.org/upcoming-events/ or by calling Sogn-Frank at 507-479-9119.