After running for the Freeborn County Board of Commissioners in 2020 and only coming up 32 votes short, Steve Kluver is giving public office another try — this time in a new commissioner district. 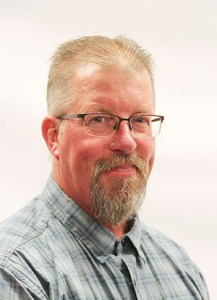 Kluver, 53, who lives about three miles south of Albert Lea, previously was in the 3rd District and ran against Commissioner John Forman in 2020, losing the election with 1,317 votes compared to Forman’s 1,349.

He said he has received an overwhelming amount of encouragement and support to run again and even had two previous commissioners come to his business after the redistricting to make sure he knew about the changes.

With being so close in the 2020 election, he decided to run again.

“I believe I can bring a positive change to the board,” Kluver said. “I want to meet the needs of the citizens in our county while working to improve the every quality of life for our citizens.”

He said he has been attending commissioner meetings to familiarize himself with the issues facing the county.

“We need to put the brakes on spending to take a more conservative approach in how the county pays for projects and improvements,” he said.

He would also like to see the storm shelter near the trailer parks in southern Albert Lea get completed and is interested in working with the Shell Rock River Watershed District Board to offer any assistance they might need for future projects. He said he is supportive of law enforcement and providing them the tools they need to efficiently and safely perform their services.

Kluver moved to Albert Lea in 1987 right after high school and earned a two-year degree from Riverland Community College.

He said he and his wife, Lisa, have owned Albert Lea Taxi since 2006 and have owned and operated Nasby Radiator Services for 28 years. He and his wife have been married for 35 years and have two children and two grandchildren.

“Having the ability to be a business owner has helped me develop managing, budgeting and communication skills,” Kluver said. “Having the opportunity to interact with friends, neighbors and customers from both the city and the county community gives me a real perspective on what their expectations are for local government issues.”

His father was on his township board and his grandfather served on his city council, so getting involved, he said, runs in the family.

He said he has a never-give-up attitude and will advocate for topics until they are completed.

The District 2 seat has long been held by Commissioner Dan Belshan, who will not seek reelection.