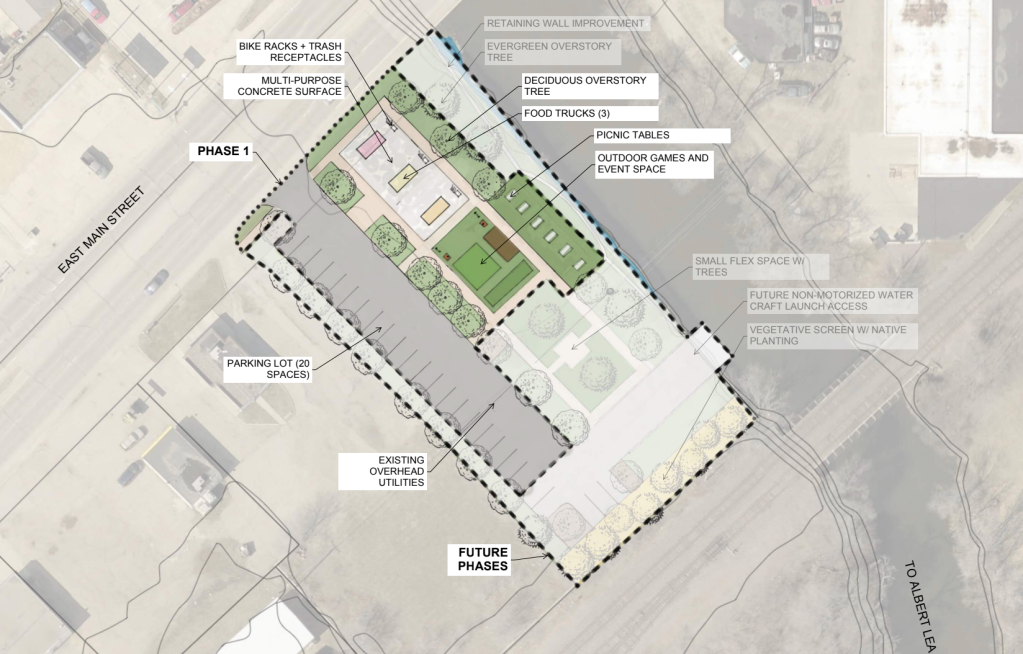 The drawings for the new food truck plaza call for space for three electrical hookups for mobile vendors, along with picnic areas for residents and a future phase with a canoe and kayak launch area. Provided

Initial plans are moving forward for a new food truck plaza in Albert Lea off of Main Street.

The Albert Lea City Council on Monday approved entering into a professional services agreement with engineering firm Bolton & Menk Inc. of Mankato to design and prepare final bid documents for the project, which will be at 804 E. Main St. on city property next to the channel between Fountain and Albert Lea lakes.

The city had previously contracted with the company for schematic design services for the food truck plaza, and the site plans have since been rearranged slightly based on initial review and discussion.

Plans call for 20 parking stalls along the southwest side of the property closest to the current Subway property with a multipurpose concrete pad next to that that would accommodate three mobile vendors with electrical hookups. Southeast of that and also closer to the channel would be green space with picnic tables and an outdoor games and event space.

A future phase includes a nonmotorized watercraft launch access along the back of the property.

City Manager Ian Rigg said the main focus of the project is to clean up the site, which used to have a restaurant on it but that several years ago was removed.

“Part of this is to improve the look of the general area as we continue to see some development along there,” he said.

Rigg said the city was given the property and stipulations state the city cannot sell it for any kind of private development. It has to remain in the city’s control and somehow be used for the public good.

Third Ward Councilor Jason Howland said he had some concern about pedestrians and asked what impact the East Main Street project would have.

City Engineer Steven Jahnke said he believed there would be crosswalks at both Katherine and Shell Rock streets from the opposite side of Main Street.

Howland said he supported the project as the property had been somewhat of an eyesore for many years.

He said food trucks have already been using that property, and this will improve the space further for them. He also noted that the plaza will not eliminate any of the other food truck locations in the city.

“This is a great project,” Howland said.

Fifth Ward Councilor Robert Rasmussen asked how the city would organize the use of the space, and Rigg said he anticipated the city would have to set up some sort of reservation system, similar to when people have to reserve a park shelter.

“It’s going to be a real added bonus to the community,” Mayor Vern Rasmussen Jr. said.

He said the project will clean up a high-profile part of the community, and he is excited to see it moving forward.

Rigg said a funding source for the project could be the premium proceeds from the recent bonding for public infrastructure.

Look to the Tribune for more from the meeting.